This page gives descriptions for the various materials and styles found in Morrowind that Armour and Weapons are typically made of. Feel free to Contact the Webmaster to contribute any suggestions, or information not included here. The images and some of the information here was obtained from the Official Morrowind site.

For information on where to find some of the rarer materials within the game, see the Item Locations and the Artifacts pages. 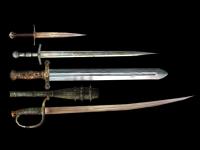 Iron is one of the the most abundant and cheap materials available for the construction of weapons and armour in Morrowind and the rest of Tamriel. Unfortunately it has a heavy weight and bends easily which produces generally poor to medium quality wares. 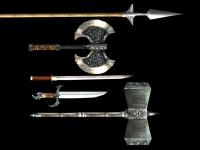 Steel, a refined form of Iron, is another of the more common metals used to produce weapons and armour. Its hardness is more than that of Iron which leads to higher quality items with slightly less weight. Steel is the choice of the common soldier and mercantile who cannot afford some of the higher quality materials. 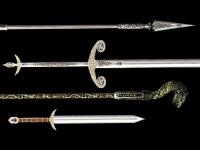 Silver is typically used to enhance the appearance of the item or to increase its effectiveness against certain creatures, such as Lyncanthropes (werewolves, etc...). Solid silver is generally not used due to its high price and low strength, but is instead plated onto another, cheaper metal (such as steel).

Dwarven armour and weapons, though heavier than steel, are highly sought for their resistance to corrosion, unmatched craftsmanship, their ability to keep an edge, and even just for their rarity. Dwarven items have not been produced since the disappearance of the Dwemer so long ago and are truly a treasure whether in the battlefield or on display.

Nordic weapons are high quality steel weapons enchanted with the runes of the witch-warriors of Skyrim for enhanced effectiveness.

Netch is a unique Dunmer leather armour design with much higher craftsmanship than the typical Imperial armour of the west. The armour, because it is more comfortable and affordable than other armours, is typically used by Morrowind outlanders.

Chitin is a type of light plate armour which is constructed by laminating several layers of insect shell glued with organic resins. The design is superior to Western leather armours as it is lighter and more comfortable. Chitin weapons are similarily created from the laminated shells of creatures to produce strong but flexible weapons, typically serrated to create a more damaging edge.

Bonemold, also known as Great House armour, is an expensive medium weight armour which can generally only be afforded by Morrowind's Dunmer nobles. The armour is composed of softened shells which are assembled and shaped before being glued with resin glues. There are a varierty of Bonemold designs for each of the various houses.

Indoril is an ornate heavy armour style similar to Chitin in construction (insect shell laminate)with the addition of elaborate designs and gold leaf detailing. The armour is worn exclusively by the Ordinators, a military order of knights under the Tribunal Temple. The name Indoril stems from the fact that the majority of Ordinators come from House Indoril, though the knights from all houses may serve.

Imperial Guard armor is composed of a variety of armour styles and is a decorative versions of the common Legion veteran's heavy infantry armor. Chain is worn over leather padding, with steel greaves, pauldron, cuirass, and helm.

Templar is another decorative style of armour worn by various Imperial military orders. Plate cuirass and greaves and a reinforced steel helm are worn over leather padding and chain which result in a heavy and uncomfortable fit, though it gives excellent protection in combat. 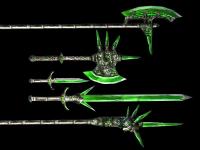 Glass weapons and armours are an ornate design specific to Morrowind and result in light and flexible items, though at an extremely high price and effort. Glass armours are created with rare metals studded with volcanic glass and results in an armour better than steel due to its ability to absorb and distribute shocks very well. Similarily, Glass weapons are created in rare metals and volcanic glass to produce edges of virtually unparalled sharpness.

Ebony weapons and armour are created from a rare form of volcanic glass buried in the lava flows from Vvardenfell's Red Mountain. The items are so named because of their black, glassy surface. Ebony items are very high quality and are well sought for, despite their high price. 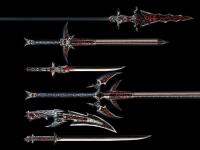 Daedric is a refined form of Ebony, a rare form of volcanic glass, using the Spirit of the Daedra dwelling in Oblivion. The process of obtaining the Daedra Spirit is not pleasant (for the Daedra involved) and the items retain echoes of that suffering involved in its creation. Daedric is usually considered the most rare and expensive item in all of Tamriel and produces weapons and armour of unparalled quality.

If you have any problems, suggestions or comments on this page or website, please feel free to use the Contact Form to send a message to the WebMaster.
This document was last modified on: Saturday, 19 February 2011, at 09:55:40 and has been accessed 52679 times ( /morrow/hints/mormat.shtml ).