The UESPWiki – Your source for The Elder Scrolls since 1995
< Tribunal: Items: Artifacts
Jump to: navigation, search 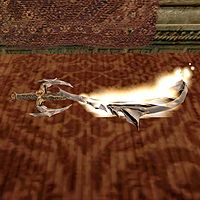 Trueflame is obtained through completing The Blade of Nerevar quest during the Tribunal Main Quest. It is one of the best one handed swords in the entire game (including all official expansions and plugins), and according to Almalexia is twinned with Hopesfire. This weapon is first identified as Odd Dwemer Weapon, which is missing a few parts. Once you get the parts and have them forged together, you will get the first version of this weapon, which has no enchantment, though it is significantly faster. It is ill-advised to enchant it yourself, as this will make it impossible to complete the Main Quest of Tribunal. Once you have completed the quest, you will have the full version of this sword, complete with enchantment.