Tribunal: Disloyalty Among the Guards

Speak with Tienius Delitian in the Royal Palace Throne Room again and agree to help him further. He wants you to check out the loyalties of the Royal Guards currently in service. You are to pretend to be a new recruit wishing to join the Royal Guardsman. You are not to take any actions but merely return any information you find to Tienius. He also mentions not to speak of your connections to House Hlaalu, even if you have no connections to House Hlaalu at all. 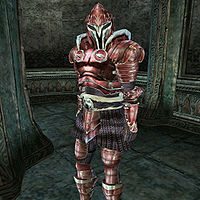 Speak to the Royal Guards in the same room as Tienius. You will want to boost their disposition before you ask about joining the Royal Guards. Again, don't mention any House Hlaalu connections, but keep the discussion on the topic of the two Kings. Most will give pretty good answers without any suspicions, but Ivulen Irano will give a particularly weak response and you'll get a matching journal entry.

If you return to Tienius now, he'll suggest that you keep looking for more information on Irano's loyalties. Return to Irano and tell him of your Hlaalu connections. Do this and he'll tell you to speak with Aleri Aren, and not to speak with Tienius Delitian. It seems like something a little suspicious is going on here.

Aleri is a Royal Guard who can be found on the second floor of the Guard's Quarters. Talk to her about joining the Royal Guards again and mention your Hlaalu connections. She is surprised that Irano directed you to her and told you not to speak with Tienius, and says she will speak with Irano further on the matter. Apparently he is not too bright and gets confused at times. At least that's what she says... as your journal entry for the matter says, Aleri may be covering up something that Irano shouldn't have said.

Return to Tienius with this information, and he'll suggest that you look through Irano's possessions in the Guard's Quarters for any further evidence in the matter. He warns you not to be noticed or you will be charged with theft like a common criminal. You'll find a chest belonging to Irano at the top area of the Guard's Quarters (it is plainly labeled with a 50 level lock). There's nothing in the chest that seems suspicious, but a careful search of the floor around Irano's chest will reveal a small handwritten note containing the Roster of Guards for the past few weeks. Be sure to watch out for the patrolling Guard so that he doesn't see you when you take the note. It suggests that Irano is planning something when only certain guards are in the throne room. Take this note back to Tienius.

Return to Tienius with the note and he will gladly accept it, saying he'll change the watch schedules to prevent anything bad from happening. Make sure you do not have a bounty on your head or else Tienius will fine you like any other guard.