This article is about the NPC. For the song, see Ragnar the Red. 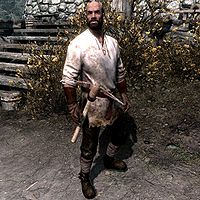 Ragnar is a Nord miner who lives and works in Karthwasten. He is Ainethach's right-hand man, claiming that his employer is "a good man".

He sleeps in Karthwasten Miner's Barracks from midnight to 8am, and works in Sanuarach Mine between 8am and 8pm. He spends the rest of the evening relaxing in the barracks. The only exception to the schedule is during your first visit to Karthwasten, when he and the other miners will be seen arguing with Atar and his fellow mercenaries.

During The Heart of Dibella, if you tell him you're looking for a little girl, he will reply, "I think you might be looking for Enmon."

Ragnar wears a set of miner's clothes, a pair of gloves, and a pair of boots. He is equipped with a pickaxe, and carries a key to the miner's barracks, as well as a selection of lower-class loot and gold.

Ragnar will sometimes talk with his fellow miner, Lash gra-Dushnikh, but the following conversations will only be heard if you have not resolved the mine dispute in favor of Ainethach:

Lash: "I've been thinking, would you like to join me in hunting?"
Ragnar: "You want me to hunt with you? I thought you preferred being alone."
Lash: "Your arms and legs are fit for catching strong, agile prey. I could use your help."
Ragnar: "I'd be honored, but I have work to do in the mines."

Lash: "When will Sanuarach Mine be open?"
Ragnar: "I don't know. Whenever those Silver-Blood men decide to leave."

If you have sided with Ainethach, Ragnar and Lash will have these conversations instead:

Ragnar: "I haven't seen you hunting in a while."
Lash: "I can afford to buy meat now. I prefer working in the mines, anyway."

At other times Ragnar will talk with Belchimac, a Breton miner:

Belchimac: "Damn Nords. Always getting in the way of us honest folk."
Ragnar: "What did you say? You lazy coward, I'll cut your throat."
Belchimac: "Nothing, Ragnar. Please... don't hurt me."
Ragnar: "I... I'm sorry, Belchimac. I didn't mean that."

Ragnar: "You're always talking about the Forsworn. You aren't thinking of joining them, are you?"
Belchimac: "Maybe I will. What do you think about that?"
Ragnar: "I'm warning you. Those people are killers. You'd never last a day with them."