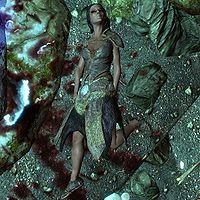 Raen is a dead Imperial bandit found in the first part of Halldir's Cairn. Her body can be found with her dead friends, Vidgrod and Agrius, next to the magical cairn. According to Agrius's Journal she and her friends were kicked out of the Knifepoint Bandit Gang and took refuge in Halldir's Cairn where they were possessed by Halldir. She was the first to sacrifice herself to him.

She wears a randomly determined set of light armor; at all levels, there is always a 50% chance she will wear fur shoes, and a set of fur armor, while the other 50% can differ for both shoes and armor; at level 1-5 it can be hide boots and/or hide armor, at level 6-18, it can be leather boots and/or leather armor, and at level 19-28 it can be scaled boots and/or scaled armor or scaled horn armor. Additionally, she has a 50% chance of wearing a set of leveled gauntlets, again randomly determined; it can always be fur bracers, while up to level 5 there is a 50% chance it can be hide bracers, from level 6 it can also be leather bracers, and from level 19 it can also be scaled bracers. Lastly, there is a 20% chance of her carrying a leveled shield, up to elven quality at level 12.

Her one-handed weapon is random and leveled as well (up to elven quality at level 22) and can be either a mace, a sword or a war axe. She also carries a bit of random loot, food and drink, with a slim chance of a lockpick and/or some gold.

Raen's body, along with her two friends, is consumed by Halldir to make his three elemental copies during your fight with him.