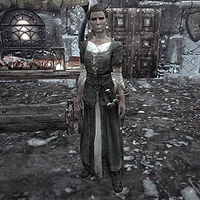 Nilsine begins her day at 6am by having breakfast at her familial home for two hours. After having breakfast, Nilsine will head over to the Windhelm Market to browse the stalls. She will remain at the market until 12pm, at which time she will wander around Windhelm for six hours. Her next activity depends on the day of the week. If it is Morndas, Tirdas, Middas, Turdas, or Fredas, she will visit the Hall of the Dead, where she will spend four hours in Helgird's quarters before leaving. On Loredas and Sundas she will instead visit the Temple of Talos for four hours. Regardless of the day, Nilsine will return home at 10pm to have dinner for two hours. Once she is done with her dinner, she will retire to her bed for the next six hours to prepare for the next day.

Nilsine wears a set of clothes and a pair of boots. She carries an iron dagger to defend herself. Besides that, she carries a key to her home and a selection of middle-class items and gold.

During the quest, Mourning Never Comes, you can taunt her by speaking to her and choosing any of the available options:

All options will cause her to walk away. 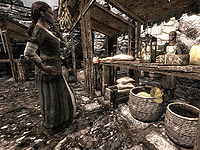 Nilsine: "Is that new batch of tomatoes ready for sale yet, Hillevi?"
Hillevi: "You know, I'm not sure. My husband's been tending to the vines, so I'll have to ask him."
Nilsine: "Just promise me when you get some more in, I'll have the first crack at them."
Hillevi: "What is it Ulfric's always saying... "On my honor as a Nord, I swear it." (Laughter)."
Nilsine: "So serious! (Laughter)"

Hillevi will indeed ask her husband, Torsten Cruel-Sea, about the tomatoes for Nilsine:

Torsten: "How's business today?"
Hillevi: "Well enough, I suppose. Nilsine bought up most of the tomatoes, and was asking if we could get more. "
Torsten: "We've got another dozen ripening on the vine. They should be ready in a few days."
Hillevi: "I'll be sure to tell her." 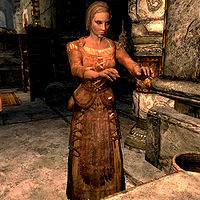 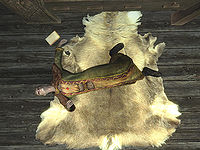 An estranged friend of the Shatter-Shield family, Muiri, will ask that you kill Nilsine. After giving you the details on the main target, Alain Dufont, she will tell you: "If you can... I want you to kill someone else, as well. You don't have to - not as part of our deal. But if you do... I'll pay you even more. It's Nilsine Shatter-Shield, in Windhelm. If Nilsine dies, too... I'll make it worth your while." Asking her why she wants Nilsine dead will have her explain that she wants to hurt Nilsine's mother, Tova: "Don't you see? I was like a daughter to Tova. A sister to Nilsine and Friga. But the family refuses to believe my innocence. No matter what I say. Couldn't they understand that I was used? That I was grieving for Friga, too? No... they treated me like garbage, threw me away. With Nilsine dead, maybe then Tova will realize what she's lost, hmm? Maybe then she'll see that I was just as much a daughter as the others. And if not, may she drown in her own tears." Asking her if there is anything else you should know will have her admit she had previously planned on killing the two herself previously, but lost her nerve after making a poison to do it: "I planned to kill Alain myself, you know. Nilsine, too. But lost my nerve. I even brewed a special poison, Lotus Extract. Maybe you could use it? Just coat your weapon with it. Then... you get the idea."

Returning to Muiri after killing Alain Dufont will allow you to complete the quest, but your payment and response will be different if Nilsine still lives. If you only killed Alain and not Nilsine, she will say: "That bastard got exactly what he deserved. But last I heard, Nilsine is still alive. So I guess you decided not to kill her as well. I have to admit... I'm disappointed. Here's the payment for killing Alain. And nothing for letting Nilsine live. Just remember, that was your decision." If you kill Nilsine as well, she will be much more grateful: "Thank you. That bastard got exactly what he deserved. And... I heard about Nilsine. You have more than fulfilled your part of the bargain. Please, take this - as payment, and a symbol of my affection. I'll never forget you." If you had killed Alain Dufont before seeing Muiri to get your contract details, she will be shocked at this piece of information. She will hint that she had intended more, but will not ask you to kill Nilsine if Alain is already dead: "What? Alain is... is dead? I... I'm grateful. It's just this... this isn't at all how I imagined things would play out. There was Alain, but I was considering more, and... Ah, well. Dead is dead. Right? My thanks to you, assassin. Here's the gold I was going to pay for the job. You earned it, after all."

Her mother, Tova Shatter-Shield, will be overcome with grief if Nilsine dies. Tova will commit suicide in response to the loss of her surviving daughter. She can be found after committing the act in her bedroom in her home, with a suicide note, Tova's Farewell, on the floor next to her. The note claims that the loss of her surviving daughter was the reason for her actions.

Her father will mention the grief that Nilsine is going through due to the loss of her twin sister: "Poor Nilsine has been wrecked since her sister was killed." Should Nilsine and Tova die as well, he will also make mention to this terrible tragedy: "Both my daughters. Now my wife? How much is one man supposed to take?" One of his parting lines will also change to reflect his bleaker life: "Please forgive my mood. I'm still coming to terms with the death of my wife and daughters..."