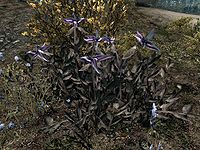 Nightshade as depicted in the Herbalist's Guide to Skyrim

Nightshade is a plant commonly found growing in graveyards. While it grows around death, it still needs light, preventing it from growing inside most crypts and barrows.

"The name and shape of this plant are known to all; long understood to be one of the more potent components in many poisons, the average Nord keeps his distance from the bright purple flowers nestled among dark leaves. It is exceedingly effective as a pure poison, but can also be combined with other compounds to stiffen joints as well. It is thus favored amongst those who wish to disable their opponents in battle, and can be found coating the blades of many of the more unsavory characters in Skyrim." —Agneta Falia in the Herbalist's Guide to Skyrim.

In terms of combinations of two ingredients, Nightshade can be combined with 52 other ingredients.

57-61(DG) guaranteed samples can be found in 37-38(DG) different locations. Locations with the greatest numbers are:

161-178(DG) nightshade plants can be found in 48-49(DG) different locations. Locations with the greatest numbers are: