The UESPWiki – Your source for The Elder Scrolls since 1995
< Skyrim: Items: Artifacts / Leveled Items
Jump to: navigation, search 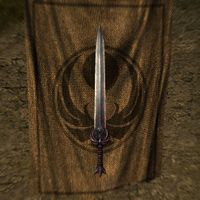 The Nightingale Blade is a sword, originally owned by Gallus, given to you by Karliah during the quest Hard Answers. Its enchantment absorbs the health and stamina of whoever is slashed by it for one second. Tempering the Nightingale Blade requires one ebony ingot and the Arcane Blacksmith perk. The sword itself is similar in color to ebony, with the Nightingale insignia engraved on the guard.

† The level 36-45 version of the blade has 25 points of Absorb Stamina, instead of the 20 points that was probably intended.