Lost Prospect Mine is a small abandoned gold mine found between Fallowstone Cave and Black-Briar Lodge. The mine is thought to be depleted.

There are two sacks to the right of the entrance. To the left is a cart loaded with rocks with a pickaxe leaning against it and a shovel next to it. 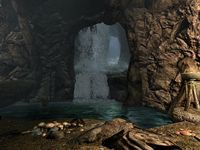 This cave is full of many samples of mushroom ingredients. From the entrance, the tunnel leads down, past a cart filled with rocks, a barrel, three sacks, and a lit brazier. The path then opens into a multi-leveled cave with a waterfall to the northwest. A table against the north wall holds a miner's journal that suggests the mine is likely tapped out and the previous owner, Bern, disappeared without a trace. Also on the table is a random potion of healing and a sack. To the left of the table is a pair of random boots on the ground. To the right of the table is a ramp heading northeast; at the bottom of the ramp is a pickaxe. The tunnel heads back a few feet and ends; there is a random helmet on the floor. Back in the main cave, the next tunnel heads southeast down a short way to another dead end. Only mushrooms can be found here. In the main cave again, to the right of the previous tunnel are two sacks and barrels. To the right of these is the tunnel you entered through. There is a path heading west past two sacks. At the end of the tunnel there is a random mace and sack, as well as a pickaxe in the southern corner. The pool fed by the waterfall is shallow and doesn't appear to contain anything.

The real treasure in the mine lies above the pool of water behind the waterfall. Accessing the ledge behind the pool, either by jumping from a nearby ledge or using Whirlwind Sprint, reveals a short passage ending in an alcove containing three gold ore veins. A skeleton, presumably Bern's, lies crushed beneath a rock fall, revealing his likely fate.