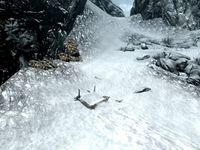 Last Vigil is a small outcropping in the Velothi Mountains east of Shor's Stone.

Upon reaching level 80, you will encounter The Ebony Warrior, who will challenge you to meet him at this location to battle him in a duel. During the climb there are several ore veins near the path, which starts some way east of Fort Greenwall.

The only distinguishable features of the camp are a collapsed tent and a skeleton. The camp contains a pickaxe as well as a moonstone ore vein and a quicksilver ore vein. A copy of the Destruction skill book The Art of War Magic can be found here too. There is a dead frost troll near where the Ebony Warrior is standing. If the location is discovered before encountering the Ebony Warrior, it will be inhabited by a single leveled animal, including snow bears and frost trolls at higher levels.