Hrothmund's Barrow is a small uninhabited cavern located west-southwest of Benkongerike. It contains the axe belonging to Hrothmund.

During the Retaking Thirsk quest you are sent here to witness a ritual that confirms the leadership of the Nords living in Thirsk Mead Hall after you have helped clear it of rieklings. 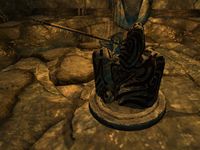 The entrance leads into a natural cave with three patches of fly amanita fungus, one on the right, a second in front of a gold ore vein, and a third to the left of a flight of stone stairs leading up in front of you. At the top of the stairs on the right is a lit brazier and beyond that is a concealed door with the chain to open it on the left. Through this there is a tunnel that twists and turns and in places has shallow water. At the other end is a second concealed door with a chain on the right. Through this door is a shallowly flooded room and on your immediate left as you enter is a silver ore vein. Opposite the door is an unlocked chest with a burial urn to the left and in front of this is a large coin purse, three loose coins, a flawless garnet, an amethyst, and a flawless emerald.

Back in the antechamber and through the unlocked double iron doors is a room with a flight of stairs leading down into a flooded room. As you move down the stairs the water will drain from the room revealing two paths, one to either side of a large stone carving with two lit braziers lighting the room. The paths rejoin and lead to the far end of the room, up a flight of stairs to a raised section containing a stone with Hrothmund's Axe stuck in it. In front and to either side are two unlocked chests.