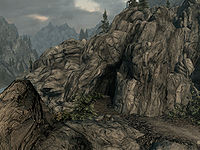 Graywinter Watch is a small single-chambered troll cave underneath the Ritual Stone (east of Whiterun). There is a single internal zone to the cave.

The cave, which overlooks the White River, is easily reachable from the nearby road. Along the west side of the Ritual Stone's rock foundation is a dirt path which leads directly to the cave.

There are two trolls in the cave; one is visible from the tunnel, and the other is hidden near the campfire. There are a total of six blisterwort, three white cap and four bleeding crown fungi around the cave. To the right of the entrance is a ramp to the higher part of the cave.

At the top of the ramp is a row of nine skulls. There is a small campsite here, with a central campfire, and the corpses of a female Nord bandit and a male Nord bandit. There are two bedrolls on one side of the fire, and a tent on the other. To the right of the tent is a copy of the Archery skill book Vernaccus and Bourlor, three steel arrows, a pile or quiver of random arrows, and Froki's bow atop a food barrel. Lastly, by the bedrolls is a knapsack.