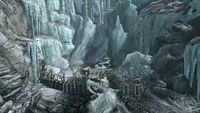 The Glacial Crevice is an immense icy cavern located within the Forgotten Vale.

It contains many Falmer, a Chaurus, and a frost troll and consists of many narrow walkways and bridges strung between the various ledges and terraces.

The exterior to this confusing cave system is the Forgotten Vale. The main entrance and initially the only entrance available is found south of Sharpslope Cave and forms the river's headwaters. There are two leveled Falmer, one of which is a magic-user guarding the entrance. There is an additional entrance/exit found in an isolated part of the vale that can only be initially accessed through this system of caves. There is also a ledge high above the crevice that is inaccessible until you have recovered the diamond paragon. A frost giant, who carries the diamond paragon, is located within the isolated part of the vale that can only be reached through this cave system.

The entrance at the river's headwaters leads into a partially flooded ice tunnel, leading into a huge open-roofed cavern. It is deeply flooded, with various ledges and terraces rising above you, including an icy ramp against the east wall rising up to further ledges and terraces. A large iceberg that can be climbed and explored is floating in the middle of the cavern, although there's nothing of interest on the berg. Under the water there are two passages; one is a narrow passage in the middle of the western wall and the other a far wider passage to the south. There is a current running from south to north, so anything falling into the water will slow float towards the entrance. To completely explore this cave system, there are two distinct circuits that you will need to follow. If you don't wish to explore the cave system skip to here.

Completing the upper circuit first enables you to loot any of the enemy that fall from ledges or walkways. It's recommended you first deal with the Falmer in this first chamber, by climbing the icy ramp against the eastern wall. There is a frost troll either wandering up it, in a battle with up to two Falmer or already lying dead. There are two leveled Falmer patrolling this section of the chamber. Too much noise will alert two more Falmer at the top, one of which is a magic-user. They are patrolling between two Falmer tents. As the path continues to ascend it crosses the remains of a walkway, which is easy to get stuck on, before reaching a ledge high above the water. There are two empty tents, with a Falmer chest to the left of the tent on the right. Above you are more ledges and a bridge crossing between two of them that cannot be reached from here. At the rear of this terrace is a passage heading south, however it's recommended that you leave that for now and return to the bottom or just jump down into the water.

For this next section, unless you are an Argonian, you will need either a waterbreathing enchantment, or spell, or plenty of potions. If you have just jumped into the water, you will probably be near where a waterfall spills into the water. There is a wide and only partially submerged passage very close to the waterfall. You don't want this passage at this time. (It leads to the area with the Falmer tent, Falmer hive, and upturned-insect rowboat mentioned below.) The submerged passage that you do want can be found by swimming north in the main cavern, towards the iceberg. When you reach the iceberg, swim to the west side of the iceberg, and immediately start looking at the west wall, below the waterline; you should find a completely submerged entrance. This submerged passage leads to an almost completely flooded chamber with five dead Falmer floating in the water. The water is nearly totally frozen over, however there are gaps and on top of the ice is a Falmer chest, with a dead Falmer beside it. Another flooded passage leads further west into another deeply flooded tall chamber, with Falmer-built walkways and bridges crisscrossing above you between ledges. The first of these rises on your left. There is also a wide passage descending in the western corner, but this forms part of the lower circuit.

Climbing the first two walkways leads to a ledge with a leveled Falmer guarding an empty tent. The next ledge has a short passage heading south, which ends with a Falmer magic-user guarding a tent and two chests, one of which is inside the tent, with the second to the left of it. The next walkway leads to a narrow ledge that continues to rise, spiraling up further, with a Falmer patrolling this section. At the top there are two passages, the first heading east with closed gates across the entrance, which leads to the exit and the isolated section of the Forgotten Vale. This is the route to take if you've already explored these caves, or aren't interested in fully exploring them. Further around the second passage heads west, with a lookout point on the right of the entrance, overlooking the ledges below. After a short distance you'll come upon a claw trap facing away from you, and around to the left is the tripwire that triggers it. Ahead closed gates lead out onto a ledge which is high above a narrow crevice. There are two leveled Falmer patrolling the ledge, with a walkway descending to another ledge, where there's a tent containing a Falmer chest. The ledge continues along the left-hand wall around to the left, before the sides of the crevice narrow and paths on both sides eventually join together briefly, before widening and splitting again. The path on the left rises, while path on the right descends. There is a leveled Falmer and chaurus patrolling the right-hand ledge, while further along the left-hand ledge is another Falmer. Either party can be alerted by noisy fighting with the other. The path on the left, leads to a bridge crossing to another platform, with an unlocked Falmer chest at the far end. The inaccessible ledge is above this end of the crevice.

Backtracking and following the path on the right as it descends, leads down to an icy tunnel with a tripwire across the start of it, which trigger twin claw traps to snap around from the sides. Once past these, there are a pair of gates and the passage turns left before leading out to the terrace at the top of the huge open-roofed cavern, where you previously stopped and dropped to the water below.

From here, returning through the submerged passage to the tall chamber with the walkways above. This time head west down the wide passage before it narrows and turns south. You emerge into the crevice that's partially flooded, up to chest height. The crevice runs west to east. You can loot any Falmer or chaurus that fell from the ledges and walkways above. They will have floated towards the beginning of the crevice due to the current. Ahead is a small area with a Falmer magic-user standing by a Falmer tent. There is an empty Falmer hive to the right and a rowboat moored in the water. The boat seems to have been built from a large overturned bug. Inside the tent is a chest. The passage turns north at this point, widens and leads back out into the first huge chamber on the south side completing the second circuit.

Once you've completed or if you don't wish to explore every path and chamber then the route through these caves is to follow the submerged path to the west in the main cavern, follow it to the tall chamber with crisscrossing walkways and bridges. Climb these to the top and take the passage with gates across the entrance heading east. The passage continues to rise, turning north, before leading out into a chamber with three Falmer tents, the middle one being larger, more ornate than normal and containing a Falmer chest. There is a path beginning on the left and spiraling up clock-wise around the walls of this chamber. At the top another passage heads southeast before emerging far above the main cavern on a ledge heading south. There is a Falmer on the first section, patrolling backwards and forwards to a tent. Just beyond the tent is a Falmer hive concealing a leveled Falmer on the wall, on the right. There is a second tent beyond the hive, which contains a Falmer chest. Ahead are a couple more empty Falmer hives on the wall and a bridge spanning the cavern, with a Falmer at either end. Across the bridge is a with ledge heading north, towards two broken pillars. They are flanking yet another passage heading east the leads to the exit and an isolated part of Forgotten Vale, which is filled with Falmer settlements.

Once you've retrieved the diamond paragon, you can use it at the paragon platform to transport yourself to an inaccessible ledge, with a matching portal that returns you to the paragon platform and an unlocked stone chest containing quality loot. The ledge is far above the crevice, near where the side walls narrow and the ledges join. From this ledge you can drop down to further ledges below you, or using at least two words of the Whirlwind Sprint dragon shout, cross to another wide ledge opposite. However none of the other ledges hold anything of interest. 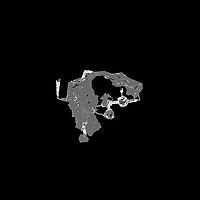