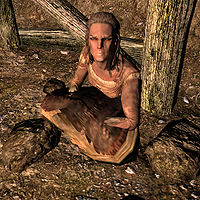 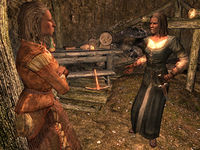 "I'll never understand why you're so bitter about everything." 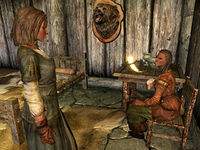 "Well, we have to cut down something!" 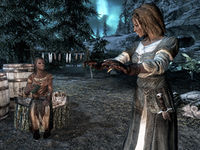 "Maybe we should just admit that this is a horrible place for a mill."

Gemma Uriel is an Imperial lumberjack turned miner working in Steamscorch Mine in Kynesgrove. She is the sister of Ganna Uriel and traveled from Cyrodiil to start a lumbermill business in Kynesgrove; a subsequent failure, as the surrounding trees turned out to be sacred to Kyne.

In order to pay the debts from the failed lumber project, Gemma reluctantly works the mine, and hacks away with her pickaxe every day between 8am and 5pm. She eats two one-hour meals a day, at 7am and 5pm, at the Braidwood Inn. Like most other residents of Kynesgrove, she sleeps in a tent in the neighboring camp, every night between 10pm and 6am. At all other times she wanders around the camp or spends time at the inn.

She wears a set of regular farm clothes and boots, and wields an iron dagger. She carries a random selection of lower-class items and gold.

When spoken to, Gemma will express her displeasure with her sister, saying, "Wouldn't even be here if it weren't for my idiot sister." and will elaborate with, "I can't believe she dragged me all the way to this snowball. I'd rather be broke in Cyrodiil than broke here." She seems to have plans for the future, though: "If these Nords don't let up soon, I might just make a break for it. At least Cyrodiil is warmer than this." She also knows Kynesgrove is a dead-end and will say, "Oh, great, another wanderer. Slumming it on your way to Windhelm?"

Gemma and Ganna can often be seen discussing their situation:

Gemma: "I'll never understand why you're so bitter about everything."
Ganna: "I'm bitter because we had lives in Cyrodiil. And we came out here to be paupers."
Gemma: "But we choose our own path now."
Ganna: "And a whole lot of good that's gotten us."

Gemma: "There is some good news though. I think the borders of the shrine may be smaller than we think."
Ganna: "Wait, so you think we'll be able to harvest some of the sacred trees up there?"
Gemma: "Well that's just it. Some of them might not be sacred."
Ganna: "I'll let you explain that one to the Nords."
Gemma: "They have to be reasonable about it at some point."
Ganna: "Gemma. This town is called 'Kynesgrove.' That stand of trees is Kyne's Grove. You don't honestly think you can just cut some down."
Gemma: "Well, we have to cut down something!"
Ganna: "Maybe we should just admit that this is a horrible place for a mill."

Ganna: "What about Ulfric? Did you ever hear back from him?"
Gemma: "No, but his housecarl sent us a letter."
Ganna: "Why didn't you tell me? What did he say?"
Gemma: "He... thanked us for contacting him, but said they didn't need any more lumber at the moment."
Ganna: "Oh."
Gemma: "You see? That's why I didn't tell you!"

Gemma: "We've got a new order in."
Ganna: "Is that a joke? "
Gemma: "No! Roggi and Kjeld need some more support timbers for the mine."
Ganna: "I suppose Kjeld asked for the usual discount?"
Gemma: "Well, he is the mayor."
Ganna: "No, it's fine. I don't mind being poor."

Ganna: "That last brigade of soldiers said there's a tall forest on the eastern edge of the White River."
Gemma: "Yes, but that's too close to Mixwater Mill. We don't want to get Gilfre angry at us by stealing her trees."
Ganna: "Well we have to harvest somewhere! This is getting absurd."
Gemma: "I want to make money just as much as you do, but we don't want to make the Nords angry."
Ganna: "Who could tell the difference?"

Gemma: "Did I tell you I got a letter from General Tullius? They've conscripted some more archers and will need..."
Ganna: "Sssssh! That's not something we want everyone to be hearing."
Gemma: "Oh, like the sleepy rebel supporters in this town are going to tell anyone."
Ganna: "Let's just not take the chance. We can talk about this later."