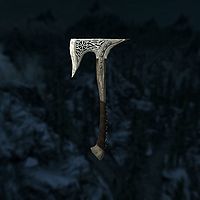 "An axe imbued with magic fueled by the destruction of the unholy. With every victorious blow against an undead creature, its power grows." — Florentius Baenius

The Dawnguard Rune Axe is a powerful war axe received as part of the Lost Relic quest. It is the only artifact in the game that is a war axe.

Its enchantment deals 10 extra sun damage to undead for every 10 undead killed with the axe since the last sunrise. Consequently, the enchantment becomes more powerful the more it is used, up to a maximum of 100 extra damage. This axe can be extremely powerful against groups of undead, as the enchantment has an area of effect. It also doesn't need to be recharged with soul gems.

In addition, this axe instantly shatters any ward spells it hits.