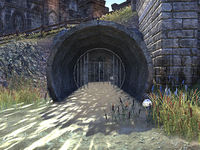 The entrance to Wayrest Sewers

Wayrest Sewers I is a group dungeon found under the city of Wayrest in Stormhaven.

When you enter the sewers in the normal version, Investigator Irnand will request that you find and kill a rogue necromancer and his conspirators before they take over Wayrest above.

You can learn its location from Wandering Jakalor outside Elden Hollow, Lady Blade outside Wayrest, or Hranir Icy-Mane outside Mournhold. 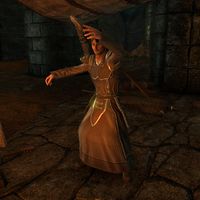 The Rat Whisperer spawns five skeevers every 13 seconds. The rats are weak and easily burned down by AoEs. While this mini boss isn't too difficult, an inexperienced player running solo might find themselves overwhelmed by rats. Apart from his rat summoning capabilities, he has all the abilities of your average Chillfiend.

Ice Arrow
A basic ranged attack that does minor frost damage.
Summon Ice Barrier
The enemy summons an Ice Barrier that absorbs projectiles fired at it until destroyed. The player should move so that there is a clear line of sight between themselves and the enemy.
Winter's Reach
The enemy releases an icy whirlwind in the direction it is facing. This whirlwind does moderate frost damage and roots all players that it hits. This spell can be interrupted or simply avoided.
Void
The enemy summons a purple orb from the sky that explodes when it hits the ground splitting into three projectiles dealing moderate magic damage. This skill then sends out magic AoEs across the floor called Void Bursts. This attack can be interrupted or simply avoided.
Void Burst
These AoEs are released after Void lands, the smaller AoEs deal moderate magic damage.
Call Skeevers
Occasionally, the boss will summon a large swarm of Skeevers to attack. They should be killed quickly to simplify the fight.

This boss is rather straightforward: break free if fear is applied to you, and try not to get cut down by his spinning maneuver.

You enter a small room in the sewers. Investigator Irnand is leaning against a light in the northeast corner of the room. Heading east, you enter a long room with a canal running north-south. At the north end of the room, a bridge crosses the canal. The western and eastern walls are lined with groups of skeevers. Three crocodiles walk around in the canal below.

Continuing east, the short tunnel will open into a round room with a staircase leading down to a drain. The large crocodile, Slimecraw, waits below near a Foul Fishing Hole. A chest can spawn in the southern alcove. Another staircase across the way leads up to a small platform with some containers. A tunnel on the lower floor leads north to Investigator Garron's ritual site.

You enter the room on a large platform with stairs leading down to the ground floor. Immediately to your right is a group of eight members of Pellingare mercenaries. Ahead the necromancer is performing a ritual on a platform in the center of the room where The Art and the Madness v.1 rests on the altar. There are three more small platforms containing statues and altars west, north, and east of him. There is a group of four skeevers in the southwest corner of the room, and another group of eight Pellingare mercenaries waits just north of them on the ground floor. Investigator Lienne is tied up in northeast corner of the room near the exit. She can be reached stealthily and spoken to prior to fighting Investigator Garron, but she will tell you to kill him first, and the exit door will not open until he is defeated.

You'll head north from Investigator Garron's ritual site to reach Uulgarg the Hungry. As you walk through the tunnel, you'll find a notice on the wall. The tunnel brings you out on the other side of the room from Uulgarg. Directly in front of you is a group of skeevers, and to your left (heading west) is a tunnel to an optional and easily skipped miniboss: the Rat Whisperer. The madman and his disciples tend to an army of skeevers, which becomes apparent as you travel towards them. You'll encounter swaths of rodents in the tunnels leading up to him and in his chamber.

In addition to rats, you'll find three strong Crocodiles in this room (two are near the entrance, one is behind the boss). There are three vermin feeders in this chamber; one is right at the tunnel's exit, the second is across the room from the door, and the third is behind the boss and to the right. A heavy sack can spawn next to the Rat Whisperer, and The Piper is located on the ground beside him. When you're done in this room, you'll be forced to go back towards Uulgarg, as the Rat Whisperer's room is a dead end.

Uulgarg is located at the top of the stairs on the east end of the room, flanked by two Pellingare Cutthroats. At the base of the stairs, you'll face a group of Pellingare mercenaries. A heavy sack can spawn by the unusable cooking fire on the left, or up the stairs and to the left. The next boss, Varaine Pellingare, lies behind the door to the east.

You'll find yourself on a ledge in the next room. A chest can spawn on the right side of this ledge. If you jump down, you can use the ladder on the south side of the platform to get back up. Five weak, hostile mudcrabs lie beneath the wooden planks on the left side of the platform. Two skeevers loiter around an overturned boat in the northeast corner of the room.

When you jump down from the platform, Varaine will appear in the middle of the partially-flooded area of the room, declaring that he can't allow your meddling to continue. A heavy sack can spawn beside a wooden beam leaning against the eastern wall, behind Varaine's spawning position. A chest can spawn in the corner south and east of this sack, behind a boat that's leaning against the wall. Once Varaine is dead, you'll head through a door on the north side of the room. There are two tunnels on the northern wall: a dead end on the left and the exit on the right.

The room ahead contains a large group of Pellingare mercenaries. There's a foul fishing hole in the water to the right of the door, in the space lit by the sunlight filtering into the sewers from the world above. A chest can spawn in the rowboat by the stairs. Three skeevers are standing on a pile of crates at the top of the stairs, and a group of Pellingare mercenaries resides on the eastern half of the platform. A lore book can be found on the table near the working cooking fire.

Five skeevers await you on the other side of the tunnel. You'll find yourself on the eastern end of a long platform in a room bisected by a dry canal. Another group of skeevers lies on the western end of the entrance platform, and a chest can spawn between a pillar and the wall near these skeevers. The platform on the south end of the room is inhabited by a swarm of Pellingare mercenaries. A heavy sack can spawn on the western end of this platform, atop a table by the campfire.

The tunnel ahead opens up into a natural cavern where you'll find the usual fare: skeevers and mercenaries. The final boss, Allene Pellingare, resides in the center of this room, amid the shallow pool lit by sunlight filtering in from the roof. A chest can spawn inside the rowboat at the entrance of this natural cavern. A group of mercenaries lies up the hill to the left of the entrance. There's a foul fishing hole across from this hill, to the south. Another chest can spawn in the empty space near the crates, and yet another can spawn southwest of Allene, in her upperclass (for a sewer) living quarters. A heavy sack can spawn in the fancy boat near Allene's living quarters, and a foul fishing hole can spawn in the water by the bow of the vessel. A heavy sack can spawn in the otherwise empty tunnel off to the west. The dungeon's exit is on the east side of this room.