This article is about the enemy. For the set, see Velidreth (set). 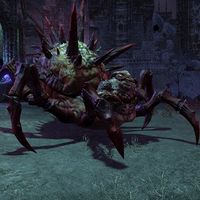 Velidreth, the Lady of Lace, is a grotesque Hoarvor Daedra who serves Mephala. She has been luring assassins to the Cradle of Shadows to create the Silken Ring, a group of assassins devoted to her mistress. She serves as the final boss of the dungeon.

She is the only enemy that drops Distilled Slowsilver.

She is the namesake of the Velidreth monster helm set. She drops no loot when defeated; instead, your rewards can be found in a glowing chest nearby. To initiate the Hard Mode, interact with the Altar of Adoration located in the rear left of the area. Doing so will cause it to periodically fire an Orb of Spite, doing AoE damage.

During the fight, she will target players with high ultimate charge, pull them in, and consume their ultimate charge, after which she will spit out balls that roll around the arena. When players get too close to the balls they will explode and apply a resource drain. Red balls drain health, blue ones drain magicka, green ones drain stamina, and the color of the balls generated correspond to the highest resource of the player whose ultimate was consumed.

Periodically, Velidreth will teleport the group to a maze area filled with respawning enemies, spike traps, and the already known darkness. In the veteran version of the Cradle of Shadows, she will split your group by teleporting two group members to the northern area and the other two to the southern one. The group should return to the boss fight area to continue the fight. To fight the darkness on the way, a player can pick up a light from one of two Flesh Atronachs that spawns in Velidreth's chambers using a synergy. Some braziers are also placed along the path in the Catacombs.

Additionally, during the fight, she might shout out "That's it! Don't move a muscle." and jump to the arena's ceiling. This darkens the room and causes a white circle to appear under each player's feet. Stepping off the circle will release a spike that deals quite a lot of damage. Once the purple hue created by this ability fades and the ground begins to tremble, a set of larger red AoE damage circles will appear under each player. Unlike the smaller white circles, these must be dodge rolled out of to avoid taking a very high amount of damage. One way you can anticipate when you should roll-dodge is to look up at the ceiling where Velidreth climbs. She climbs up and stays still, and when she moves again is when you should dodge.

When not busy performing any of the attack phases above, Velidreth will actively target any players attempting to resurrect by charging a ranged projectile. If this attack is not interrupted, the projectile will deal knock back along with a moderately high amount of damage and most importantly interrupt the resurrection attempt.

After using the lever to open the door in the hall Tsatva-Lan warned you in:

Velidreth: "Mm … getting warmer. It's a shame you're not as smart as Tsatva-Lan. What a delightful servant you'd make!"

In the big room before the flesh atronach ambush:

Velidreth: "Hmmm … warmer still. Best hurry, sweetmeat. Tsatva-Lan receives my blessing even as we speak. Killing him may prove … difficult."

Using Shadow Sense, when she climbs to the ceiling:

Velidreth: "Hahaha! On to the next course!"

Banishing players to the catacombs:

A player dies in the catacombs:

Forcing players down into the arena if they linger too long on the ledge after traversing the Catacombs:

Velidreth: "Ah ah ah! Can't hide from me!"
Velidreth: "I see you lurking up there!"

Interrupting an attempt to resurrect a dead player: