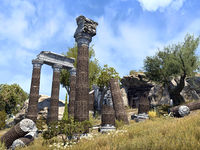 Tribune's Folly is an excavated Imperial ruin found east of Anvil. Many minotaurs can be found roaming the exterior, led by the corrupted minotaur Limenauruus. It is suspected of being the ruins of Fort Faleria, an ancient stronghold destroyed by dark magic. The area is haunted by the spirit of Lord Nunex Faleria.

Several tombstones are resting outside the ruins' entrance. The Lost Fort Faleria explains the origin of the ruins.

To clear this location and mark it as complete, you need to kill the following bosses:

This Elder Scrolls Online-related article is a stub. You can help by expanding it.
Retrieved from "https://en.uesp.net/w/index.php?title=Online:Tribune%27s_Folly&oldid=2160566"
Categories:
Hidden categories: