The UESPWiki – Your source for The Elder Scrolls since 1995
< Online: Quests: Craglorn / Story Quests
Jump to: navigation, search

The Celestial Warrior is worried about his champion, Titus Valerius. Lost in time, Titus' memory has begun to break apart. He no longer remembers who he is or his connection to the Warrior. Without his memory, the Warrior can't send him home.

To start this quest, you must have completed the main story in Craglorn, including both Lower Craglorn and Upper Craglorn questlines. After finishing the quest Dawn of the Exalted Viper, the Celestial Warrior will appear outside the Star-Gazers' Observatory to ask for your aid.

"Mortal, this Celestial Guardian has one more obligation for you to fulfill."
Of course. What do you need me to do?
"My champion, Titus, who I called across the sands of time in my moment of need, is fading. His mortal mind can't deal with the shift in his reality. The longer he remains here, the more likely he will lose all that he is."
Can't you just send him back to his own time?
"If only it were that simple. As Titus loses parts of himself, his connection to me is severed. I can no longer reach him with my blessing. Titus has done everything I asked of him. It is time to send him home. Will you help him remember who he is?"
Yes, I'll help Titus.
"I knew I could count on you. I last saw Titus is the north, searching for his wife's grave. As his mind slips away, he fights to hold onto it. It pains him to accept that all he knew is dead and gone, yet he strives to keep the memories alive."
Why did you bring Titus to this time period?
"The Serpent's corruption was insidious. By the time I realized what was happening to my Apex Stone, I was too weak to fight back. But I was able to call my champion to me.
Titus is valiant and he knows this region well. I knew he would be an asset."
The other summoned soldiers, such as Tarish-Zi, were controlled by the Serpent. Why wasn't Titus?
"The Serpent forced me to summon Tarish-Zi and his army, using our connection to infiltrate their minds. I summoned Titus before the Serpent completed his control over me. It was my last free act, and it allowed Titus to remain true to his own heart."
Did you know Titus would lose his memories?
"Such complex and powerful magic always contains an element of risk. But it was never my intention to harm Titus. Now I want to make things right. Help restore Titus's memories and his connection to me, and I can send him back where he belongs." 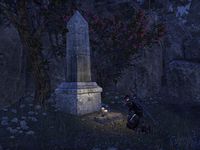 Titus at his wife's grave

Titus can be found kneeling by a small lake just outside the Howling Sepulchers. He will be upset when you try to approach him.

"Now is not the time, my friend. I mean you no ill will, but if you don't leave me to my thoughts I will draw steel against you. I came here to remember her. I have to remember her. I've lost everything else. I can't lose her as well."
What's happening to you?
"What's happening to me? I'm fading away! I remember everything since I arrived in this time perfectly. But memories from my time? Memories of who I really am? They slip through my fingers like sand in an hourglass!"
Why did you come to this desolate place?
"I came here to try to hold on to the memory of my wife, but the realization of her death … it's almost too much to bear!"
If you return to your time, will your memories come back?
"More questions concerning magic? Do I look like a mage to you? I once was proud that the Warrior had chosen me, but now that honor hangs over my head like a curse. I can't even hear the Warrior's call any more. Please, friend, just leave me be."

At this point, the Warrior will appear atop a nearby precipice.

"The darkness that shrouds Titus's mind blocks my connection to him. But since you touched my Apex Stone, I can still communicate with you. You consider Titus to be a friend. Are you ready to help him?"
Yes. Tell me what I have to do.
"Once there was a blade of legend called War-Sworn, wielded by my greatest champions. It has been without a true consort for far too long. We much change that. Currently, an Iron Orc carries the blade like a trophy, even though he cannot wield it."
And this sword can help Titus recover his memories?
"War-Sworn can do many things—in the hands of one worthy to wield it. Recover the blade and give it to Titus. It will remind Titus of who he is and restore his connection to me. Then I can send Titus home."
Where can I find this Iron Orc?
"The blade resides in the ruins to the southwest. While the Iron Orc, Skarath of the Many, is not worthy of War-Sworn, he is a powerful combatant. He collects trophies from his victims and will not give up the blade willingly."
I'll find Skarath and retrieve the blade.
"The blade will restore Titus to his true self, but time grows short. Already, I sense that Titus contemplates a warrior's death as a release from his torment. We cannot allow that. Titus still has many battles to win before his life comes to an end." 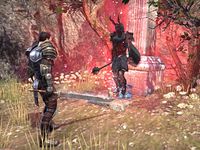 The Warrior appears to Titus

Skarath of the Many can be found in an Iron Orc encampment to the southwest, near the Valley of Scars Wayshrine. He has two welwa companions and will continually summon Iron Orc enemies while in combat. Once your group has defeated him, take War-Sworn from his corpse and return to Titus.

"It's good to see you again before the end, my friend. I was just saying one last farewell to my wife before I depart to find my final battle."
If you plan to go battle, take this blade. The Warrior wants you to wield it.
"This is a magnificent blade! I can feel its energy. It calls to me, just as the Warrior once did. It feels right. As though I was meant to have it. Well then, in friendship, I hope you will accept my old blade. Something to remember me by."

Your reward is a two-handed sword named Riven Hourglass, Sword of Titus Valerius. After completing the quest, the Warrior will appear to Titus and return him to the First Era.

The Celestial Warrior: "Take up my blade, Titus Valerius. You have earned it. Let its might flow through you and remind you who and what you are—a warrior true!"
Titus Valerius: "I feel stronger. My memories return! Celestial Warrior, hear me! I have done all you have demanded. I have served faithfully. Now, please, send me home."
The Celestial Warrior: "You are my champion, Titus, in whom I am well pleased. Hold tightly to the blade. It will travel with you and serve you well in your own time."
Titus Valerius: "My comrades! My friends. Never have I fought beside more noble heroes. This may be farewell, but I will not forget you. Fight on, and never let your values falter. With you, I know the future is in capable hands."
"Larisa … beloved. My part in this war is over. I'm coming home."
The Celestial Warrior: "Do not fear. The story of Titus Valerius recounts one of the greatest warriors to ever walk the surface of Tamriel. His achievements echo even into the future. Perhaps the same will be true of you."