The UESPWiki – Your source for The Elder Scrolls since 1995
< Online: Quests: Craglorn / Story Quests
Jump to: navigation, search

Hara has decided it's time to do something about the third guardian, the Thief. The Thief has been mysteriously absent except for when she appears to speak to me in private.

After you've completed The Warrior's Call and Elemental Army, a Star-Gazer named Cursare will run up to you. She informs you that Hara, Kelmen Locke, and Titus Valerius disappeared into Hara's private chambers to discuss the Celestial Thief and haven't been seen since. She directs you to Nazdura at the Star-Gazers' Observatory to learn more. 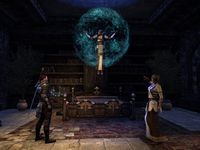 When you arrive, Nazdura will tell you that Hara has been feeling exhausted and is upstairs resting with Titus and Locke. Go upstairs to the Private Quarters, and you will witness Hara being consumed by some unknown magic.

Before she disappears, she mentions the ruins of Reinhold's Retreat. Titus will say "She's gone... just... gone. A word, if you will, my friend. I believe I can be of help."

Titus will be surprised by her knowledge of the ancient city, as it was an all-but-forgotten ruin even during his time. It was buried by his liege Emperor Tarish-Zi after he failed to find the treasure the ruins supposedly once held, and Titus will reveal that the city of Belkarth was built right on top of it. He will say "I'll find Kelmen and meet you at the lake. Nazdura, come. There's nothing more we can do for Hara here." and leave with Nazdura. He and Kelmen will agree to help explore the ruins and rescue Hara. The ruin's entrance is located in the lake just south of town. Talk to Kelmen when you arrive.

New Task: Breaching the Ruins — Solve the riddle of the entrance to Reinhold's Retreat.

The entrance is sealed by a puzzle, requiring you to activate the sconces around the ruins in the lake. Locke mentions there is a possibility that the lock was designed to be impossible to open alone, but it will also work if you activate each sconce in sequence. A whirlpool will appear in the center of the lake when it is done successfully, allowing you to enter Reinhold's Retreat.

Task Completed — You opened the hidden passage into Reinhold's Retreat.

Once you enter the ruins, you will be confronted by large groups of enemies from the Scaled Court. They are mortals who have been manipulated into serving the Serpent, and your group will need to fight its way through them. Reinhold's Retreat is a linear dungeon, although you will need to defeat a champion of the Scaled Court to continue further in. In the final room you will discover a giant ethereal snake wrapped around a large stone, which Kelmen will confirm to be the Thief's Apex Stone, hidden beneath Belkarth all along.

Kelmen Locke: "There! The Apex Stone! What are they doing to it? Is this how they corrupt the stones and enslave the Guardians?"
Titus Valerius: "Look! It's Hara! Why would they have her here? We have to find a way to free her!" 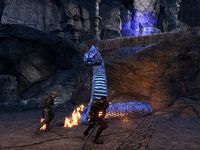 New Task: Rescue Hara — Drive back the Serpent's corruption and save Hara.

The Serpent's spectral avatar will attempt to stop you by spawning continual waves of Scaled Court enemies and spewing large area of effect poison projectiles which linger on the ground. To damage him, you need to defeat both Lamia Curares within quick succession, which will light up the Aetherial stones on either side of the arena. Activate them to shock the Serpent. If you don't defeat them quickly, the beaten lamia will regain its health and begin fighting again after a short stun period. After the stones are activated three times, the snake will descend and you will need to fight the Serpent's Corruption directly.

Hara: "You always underestimated the will of the true heroes of this world, Malazar! Witness the foreshadowing of your doom! These mortals will see to it that your chaos is undone. We will reunite the Guardians, and you will be banished once more!"

Task Completed — You stopped the Serpent's corruption and saved Hara. 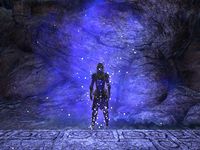 Once you've defeated it, Hara will descend from her prison and take on a more familiar form.

Kelmen Locke: "Could it really be…?"
Titus Valerius: "Hara… You? All along?"
Hara: "It had to be this way. But the time for deception is ended. Now is the time for action."

She will reveal herself as The Thief, who has been hiding in plain sight the entire time. She will open a portal to the center of Belkarth for your group, and requests that you return to the observatory to speak of what is to come after she has revealed herself to the Star-Gazers. Once at the observatory, she will give you your reward: the Pendant of the Sundered and leveled gold.

As you leave the Observatory, you are called over by Thaenaneth. She informs you that her patron, Regent Cassipia, has plans for the Scaled Court that differ from those of the Serpent. Cassipia can be found near Dragonstar Wayshrine. This will start the quest Slithering Brood.

After this, the Undaunted will appear at the Crossroads Tavern and offer you the two trial quests in Lower Craglorn, Assaulting the Citadel and The Mage's Tower.