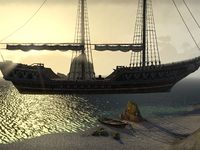 The ship which will take you to Tempest Island

It has been invaded by the Maormer, who use it to hone their storm magic for a planned assault on the Valenwood coast. A group of Dominion soldiers led by Battlereeve Alduril needs your help defeating the Maormer invaders and their lamia allies.