The UESPWiki – Your source for The Elder Scrolls since 1995
< Elder Scrolls Online: Quests: Imperial City / Side Quests
Jump to: navigation, search
Legate Gallus's spying revealed much of the Worm Cult's plans, but his superiors want more information. He asked me to help once more. 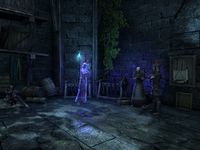 Legate Gallus spies on the Cult

At your Alliance Rally Point in the Memorial District, you will find a member of the Imperial Legion named Legate Gallus. He plans to spy on the Worm Cultists that occupy the district, using "auricular geodes" recovered from the Arcane University. Agree to help, and he will explain how to use them.

The first step to this quest involves killing two Xivkyn enemies within the quest radius to charge your Dormant Auricular Geodes. They can primarily be found in the center of the district, which can prove dangerous due to the high density of enemies in the area and the risk of attack from enemy players. There are Xivkyn wandering the streets, as well as standing at the edge of the graveyard in the center of the district, directing summoned skeletons.

After obtaining two Charged Auricular Geodes from the Xivkyn, the next step is to plant them on Skeletal Laborers, which can be found digging in the center of the district. Once you've distributed all four of your geodes, return to your Alliance base (either through the sewers or through respawning/teleporting) and locate Legate Gallus near the Scouting Board. He will reward you with leveled gold and a Light Tel Var Satchel. Waiting around after completion of the quest will allow you to witness a ghostly vision of a Worm Cultist giving away their plans.

Notes
* Any text displayed in angle brackets (e.g., <Alias=LocationHold>) is dynamically set by the game and will be filled in with the appropriate word(s) when seen in game.
Retrieved from "https://en.uesp.net/w/index.php?title=Online:Speaking_For_The_Dead&oldid=2746986"
Categories:
Hidden categories: