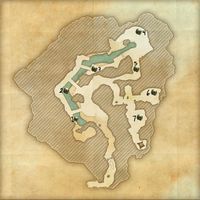 Speaker Terenus has a task for you. He needs you to kill someone. That "someone" will be one of the following individuals, whose numbers on this list correspond to their numbered locations on the map provided: 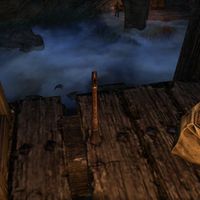 The Engraved Flute has a few locations that it can be [verification needed — was its location instead changed?], the closest of which being fairly close to the entrance. When you reach the entrance of the cove proper, go straight up the hill and turn left, the Engraved Flute sitting by the wooden bridge— if it isn't there, then it can be found behind the bar, across the northernmost bridge.

The Mead Formula will be located in a secret chamber hidden behind a hanging tapestry. To get to it, head up the hill past the entrance tunnel and make a right at the tunnel past the bar. Make another right to continue through the tunnel, and when you get to the crossroads, turn right again. Head into the back of that room and the mead formula will be on a nightstand next to the bed. It is marked on the map provided with a scroll icon.

Your tertiary objective will be to either:

Finally, you'll want to escape Trader's Cove in under two minutes after the kill. Stepping into the entrance area counts as escaping the area. You do not have to actually exit the zone for the game to count you as having "escaped". As long as you make it to the ladder room, you're good. Climb the ladder when you're ready to leave and speak with Terenus for your reward.

Notes
* Any text displayed in angle brackets (e.g., <Alias=LocationHold>) is dynamically set by the game and will be filled in with the appropriate word(s) when seen in game.
Retrieved from "https://en.uesp.net/w/index.php?title=Online:Sacrament:_Trader%27s_Cove&oldid=2747011"
Categories:
Hidden categories: