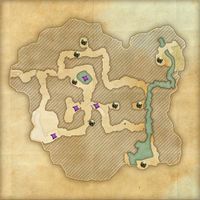 The Black Sacrament has been performed and Speaker Terenus requires you to complete the contract. Speak to the Speaker and accept the contract. You will be transported to Smuggler's Den, where you will be considered to be trespassing.

The Speaker asks you to complete a number of objectives in order for him to determine the level of your reward. These include two standard objectives (not alerting the residents to your presence, and escaping before the overseer arrives), and two randomized objectives (one requiring the target to be killed in a specific manner, and the other can be to kill a second person or destroy an object of interest).

The objective to stay hidden will only fail if you are spotted five separate times. The overseer arrives when you kill the main target, and you have two minutes to escape after they arrive, so it is recommended to complete the secondary objective first. If you are tasked with killing a target with poison, they do not need to die from the poison, just take damage. Take note that if you are tasked with killing the target with poison they will need to be alone or you will be spotted and lose one of the five alert warnings for the objective to stay hidden. You can also kill someone with the blade of woe while your current ability bar has a poison slotted to complete the poison objective.

You could also be instructed to destroy an object of note in the Smugglers Den. These include a Kwama Queen Egg— hidden in a secret passage accessible via a Suspicious Torch— and Important Documents. An animal named Lucky can also be an optional target. Lucky is an animal that spawns at the pond in the central chamber, and has enough health for you to kill it in one hit. As with killing a target, destroying an optional objective grants you a bounty. Killing Lucky also counts towards livestock murdering achievements, and Lucky is treated as such. Watch the room, and try to destroy your optional target without being seen. Most characters will turn to face a wall (or at least opposite of the thing you need to destroy or kill), so try to get your kill in there.

Consult your map for the location of the targets and make your way stealthily through the den. Take note of the secret paths and plan your escape route before you strike. Watch for wardens along your escape route and plan accordingly. Secret passages are vital to not being caught and leaving before the overseer arrives. It also helps to either be a nightblade or have stage four Vampirism. Nightblades can cloak, and stage four vampires have a passive ability that reduces detection radius as well as one that makes their stealth speed about as fast as walking, which can be immensely helpful when trying to sneak by a guard quickly.

Once the target is dead, make your way back to the entrance and leave. Once back in the sanctuary make your way to the Speaker and report your success.

Notes
* Any text displayed in angle brackets (e.g., <Alias=LocationHold>) is dynamically set by the game and will be filled in with the appropriate word(s) when seen in game.
Retrieved from "https://en.uesp.net/w/index.php?title=Online:Sacrament:_Smuggler%27s_Den&oldid=2747009"
Categories:
Hidden categories: