Nimble and fleet, this fawn sticks to your side like you're its mother. Cute? Oh yes. Those eyes! That nose! Those spots! 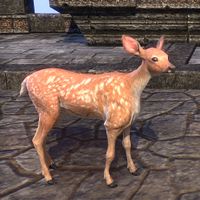 The Fawn is available as an Epic-level reward in Frost Atronach Crates. Its default name is "Sprinter".

When spring comes to the sun-dappled forests of southern Wrothgar, Echatere babies are sometimes born with temporary spotted camouflage that fades as the Echalette matures. It's pretty while it lasts. 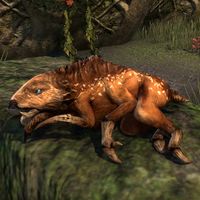 The Fawn Echalette is available from the Crown Store for 00700700

A native of Hammerfell, the Fennec Fox has been domesticated by many of its desert peoples, and makes an alert and loyal pet. 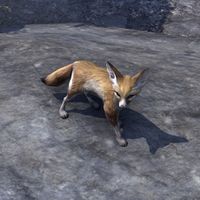 Fennec fox pets were available from the Crown Store for 00700700

, and can also be found in Dwarven Crown Crates as an Epic-level reward. Its default name is "Li'l Vixen", although it originally had no default name.

Who doesn't want to be followed around by a hulking, armored Daedric bug with steel mandibles and a venomous stinger? It eats nothing but the cries and lamentations of your enemies, so it's an easy keeper. Friendly, too—in its way. 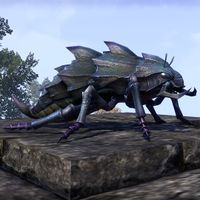 . Its default name is "Evil Weevil".

In the Clockwork City, mechanical Firepot Spiders can be programmed to follow chefs around like little walking barbecues. Someone has devised a secret method for exporting them from Sotha Sil's hidden world— but how? Better get one while you still can. 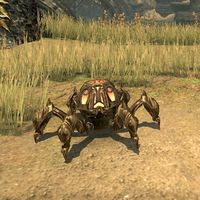 The Firepet Spider is a Firepot Spider pet available originally from the Crown Store for a limited time from August 9 to August 13, 2018 and costed 1,000 crowns. It returned with the Xanmeer Crown Crate season as a Legendary-level reward. Its default name is "Rotisserie".

Dramatic coloration marks this gryphon as one originally bred by Khajiit in Elsweyr. Due to some "incidents," the unfortunate breeders sold their stock, making them available to fine folk such as you! 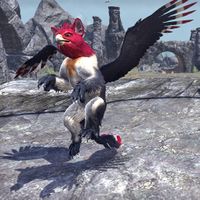 The Firepoint Fledgling Gryphon is available as an Epic-level reward in Sovngarde Crates. Its default name is " Frolicfeather".

Summoned from the Infernace plane of Oblivion, this Flame Atronach variant is given the form of a charming little bear cub. Good for warming hearts and hands alike! 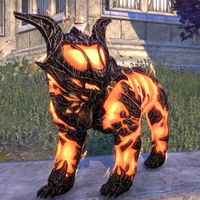 The Flame Atronach Bear Cub was available as a daily reward for day 21 of February 2020. Its default name is "Scorchcub".

"Though smaller than its mount counterpart," wrote arch-conjurer Corvus Direnni, "it's necessary to take all precautions when handling the Flame Atronach Pack Wolf. I've found their curiosity insatiable, especially when near flammable objects."

The Flame Atronach Pack Wolf is a pet that was given out to players who watched Bethesda's QuakeCon Keynote livestream on Twitch on Friday, August 10, 2018. Its default name is "Flameprancer".

Due to the unusually tame nature of the Flame Atronach Pocket Horse, it has a long tradition of being the companion of younger members of the Direnni clan. It's a good introduction to Daedric summoning for any budding conjurer. 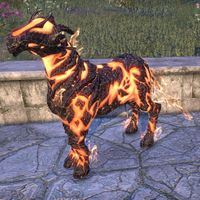 The Flame Atronach Pocket Horse is available on all platforms as a Twitch drop for watching QuakeCon in August of 2020. Its default name is "Embermane".

This Flame Atronach compelled to take the form of a small guar makes for a great traveling companion, especially in colder climates. It's best to only summon your newfound friend when outdoors, as their mischievous natures might lead to accidents.

The first summoner of this fiery kitten was attempting to compel the Daedra into the form of a full-grown Senche-Jaguar. Though initially embarrassed by her mistake, she nonetheless grew an attachment to this far more adorable form. 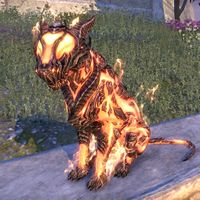 The Flame Atronach Senche-Jaguar is available to players who watched the ESO Panel at QuakeCon live on Twitch on Saturday, July 27, 2019. Its default name is "Inferno Kitten".

All the large Salamanders of southern Tamriel have elemental powers, but some specialize in particular forces; the Flame Skin breed, for example, almost ripples with fire. 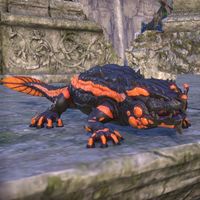 The Flame Skin Salamander is a pet exclusively available as part of the Newcomer Pack. Its default name is "Steamy".

Like the Purple Daggerback, the breed of Flameback Boars clearly had some kind of brush with the uncanny that imbued them with magical aspects. Regular boars just don't have crimson glowing eyes and flame-colored bristle crests down their backs. 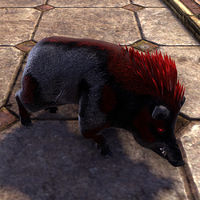 The Flameback Boar is a pet available in the Scalecaller Crown Crates as an Epic-level reward. Its default name is "Barbecue".

Though eventually it will grow into a massive beast with a vast wingspan, a Fledgling Gryphon is just the right size for a companion creature, and its juvenile antics are hilarious! 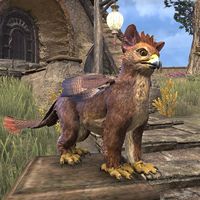 The Fledgling Gryphon pet is included with the Summerset Collector's Edition. Its default name is "Beaky".

Unlike most Gryphons, which catch live prey, the Vulture Gryphons subsist primarily on carrion. But they're still majestic, and their young Fledglings still make adorable pets! 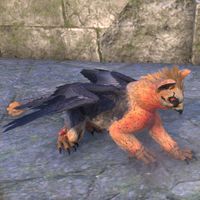 The Fledgling Vulture Gryphon is available from the Crown Store via Dragonscale Crown Crates as a Legendary-level reward. Its default name is "Li'l Buzzard".

These mysterious green-glowing Brassilisks have been showing up in the environment outside the Brass Fortress. Some Clockwork Apostles suspect there's a rogue Incarnatorium assembling them somewhere out in the Radius. 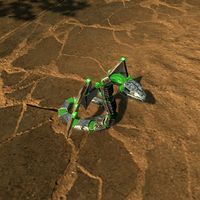 The Foxbat Brassilisk is a brassilisk pet available exclusively to Xbox from the Crown Store for free between November 7 and December 31, 2017. Its default name is "Brassbones". The pet's green coloring is a reference to the Xbox's color-scheme.

Known in Deshaan as loyal pals, the Freckled is the most intelligent breed of guar.

The Freckled Guar was available from the Crown Store for 00700700

The Frisky Scrib is a black and blue scrib pet that was given to PS4 players who pre-ordered Morrowind through the PlayStation Store. It is notable for being the first platform-exclusive item since ESO released on consoles. Its default name is "Larvie".

You needn't know Conjuration magic to have an atronach companion—Clan Direnni mages have gifted bear cubs of that provenance to those they deem worthy. They can be oddly heart-warming despite their frosty form. 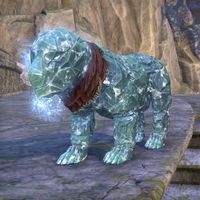 from February 10 to February 13. Its default name is "Iceclaw".

A frost atronach in kagouti calf form, this companion embodies the essence of Vvardenfell's wilds in an icy way, making it an interesting choice for heroes seeking to stop threats in that region. Native Dark Elves might look askance at you, however. 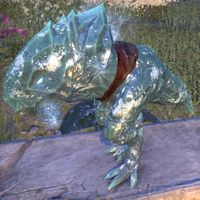 from February 3 to February 6. Its default name is "Winterstorm".

Are ponies too adorable for you? Fear not! This pony takes adorable, freezes it, and adds a hefty helping of "don't even think about petting my nose." A welcome companion to those who hate the heat, as well! 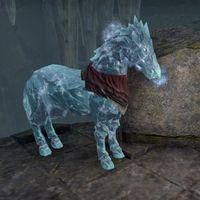 Some would choose to pass on a senche cub that has sharp edges and no fur. But not you! In fact, you can look forward to its cooling nudges for attention while trudging through deserts. 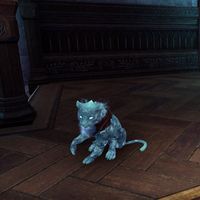 from February 17 to February 20. Its default name is "Frostpurr".

This pup isn't one for simple games of fetch, but it will follow you loyally through your adventures. That and its ability to chill your water simply by curling around it? Practical and cute, in its own frosty way. 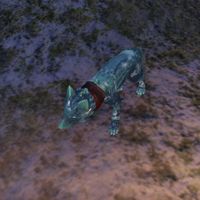 from February 24 to February 27. Its default name is "Snowball".

Some claim that this indrik comes into being when the first rays of the sun hit pristine snow. Whether that's true or not, it can help you make an impression as you wander the streets of Alinor or venture beyond that. 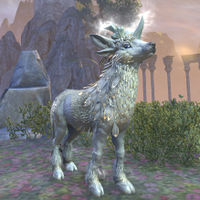 . Its default name is "Snowpearl".

Nords who follow the tradition of hanging Frostbane totems and talismans on their beasts to protect them from Skyrim's bitter cold often do it even when the animals are still young, to get them used to the idea. 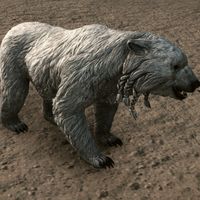 The Frostbane Bear is a pet that was available during the New Life Festival and the Undaunted Events of 2018. Its default name is "Pudgelocks".

The hardy ponies of the frozen north look even shaggier when they're decorated with Frostbane hair-knots and ancient Nord totems. Whether the talismans keep the cold away is impossible to tell, but it's certain these ponies never lose their good cheer. 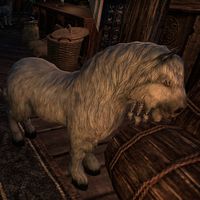 The Frostbane Pony is a pet that was available during the New Life Festival and the Undaunted Events of 2018. Its default name is "Shaggypony".

Though the reptilian Guar are native to the warmer climates south of Skyrim, the compact Pony Guar have long been popular pets among the aristocracy of Riften. Traditional Nords like to dress them in the Frostbane garb used on more local animals.

The Frostbane Pony Guar is a pet that was available during the New Life Festival and the Undaunted Events of 2018. Its default name is "Jingles".

In "The Tail of Ysgramor's Cat," the Harbinger's Sabre Cat hunting companion is described as being festooned with Atmoran Frostbane talismans, and some tradition-loving modern Nords still decorate their Sabre Cats in the same manner. 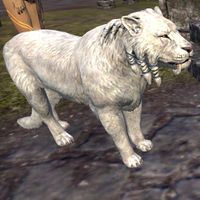 The Frostbane Sabre Cat is a pet that was available during the New Life Festival and the Undaunted Events of 2018. Its default name is "Totem-Tusk".

To accustom their Frostbane Wolves to the click-clacking of dangling talismans and totems, the ancient Nords began dressing their companion wolves in Frostbane garb from an early age. 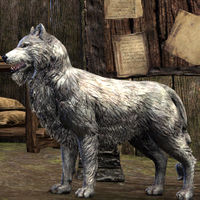 The Frostbane Wolf is a pet that was available during the New Life Festival and the Undaunted Events of 2018. Its default name is "Shaggypelt".

"Though I lost many trained frostbite spiders to those who took them for an aggressive infestation of Solitude, I moved outside town and now give them away. They are trained, venomous, and ready to follow you in your travels!"—Hlokela of Solitude 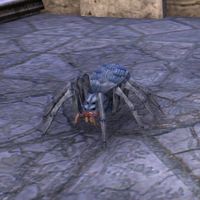 The Frostbite Spider is available as an Epic-level reward in Nightfall Crates. Its default name is "Webby".

"This devious little creature will drop the ambient temperature considerably when summoned. And mind your fingers—the little monster likes nothing better than to freeze them, break them off, and pop them into its mouth!"—Divayth Fyr 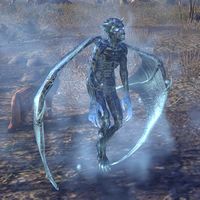 The Frostshriek Imp is available as an Epic-level reward in the Sovngarde Crown Crates. Its default name is "Nibblenumb".