The UESPWiki – Your source for The Elder Scrolls since 1995
< Elder Scrolls Online: Quests: Undaunted
Jump to: navigation, search
I've been invited to join a group of adventurers called the Undaunted.

The Khajiit, Turuk Redclaws, has invited me to join a group of adventurers called the Undaunted.

Mighty Mordra, an Orc woman, has invited me to join a group of adventurers called the Undaunted.

Kailstig the Axe has invited me to join a group of adventurers called the Undaunted. 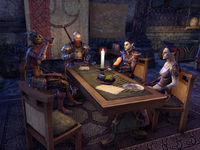 The Undaunted in Stonefalls

To join the Undaunted, you must locate a group of them in your starter city (Vulkhel Guard, Daggerfall, or Davon's Watch). In Vulkhel Guard, Turuk Redclaws can be found upstairs in the Salted Wings Tavern. In the city of Daggerfall, Mighty Mordra can be found downstairs in The Rosy Lion. In Davon's Watch, Kailstig the Axe can be found sitting just inside The Fish Stink. Alternatively, each quest giver can be encountered at the entrance to the respective dungeons, detailed below.

The questgiver will challenge you to prove yourself before allowing you to join the Undaunted. Although the quest implies that you need to clear the zone's group dungeon in order to become Undaunted, you actually just need to travel to the dungeon's entrance to finish this quest. After discovering The Banished Cells, Spindleclutch, or Fungal Grotto, return to the quest giver at the tavern location and listen to the initiation chant to receive some gold and access to the Undaunted skill line.

Notes
* Any text displayed in angle brackets (e.g., <Alias=LocationHold>) is dynamically set by the game and will be filled in with the appropriate word(s) when seen in game.
Retrieved from "https://en.uesp.net/w/index.php?title=Online:One_of_the_Undaunted&oldid=2687713"
Categories:
Hidden categories: