The UESPWiki – Your source for The Elder Scrolls since 1995
< Online: Quests: Dark Brotherhood
Jump to: navigation, search

The Listener sent a mysterious Dark Elf to the Sanctuary to deliver a strange tome by the statue of the Night Mother. She mentioned that it was meant for the killer who tasted death. 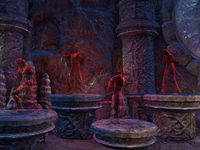 The eliminated targets will appear as ghostly projections inside the Sanctuary

After doing your first job for the Sanctuary's matron, and your first sacrament quest, an assassin named Nevusa will appear at the Sanctuary. Speak to her to begin the quest:

"The Listener and the four Speakers make up the Black Hand, the ruling council of the Dark Brotherhood. You might even say she's the leader of the council.
The Listener hears the words of the Night Mother and whispers them to the Speakers."

You said the pages of the book are blank?

"As blank as the stare in a dead man's eyes. But go ahead and see for yourself.
I'm curious to find out if the Listener is right about you. If you can see what's really there." 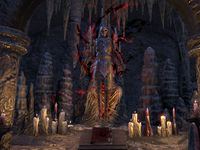 The Guise of Cadaverous Assassin

Read the book, and you will find instructions for targets all over Tamriel, each instruction concluded with the words "You will know them by their eye." Then, speak to Nevusa to complete the quest:

"Tell me, Assassin, what did you see?"
I can read the Litany of Blood.
"So the Listener was right. Tell me, what did you see?"
It's some kind of prayer or ritual, maybe. Very poetic.
"What a blessing you've received! The Night Mother has chosen you to fulfill the Litany of Blood.
Let me ask you this. Did the passages make any sense to you?"
It's a chant. Descriptions of people, like riddles, ending with "you will know them by their eye."
"Of course. The targets must be marked in some way. Easier than I would make it, but who am I to question the Listener?
It's clear to me that you must decipher the Litany of Blood and kill the targets inscribed on their pages."
Why do you think they're targets?
"What else would a book provided by the Listener contain? Determine each target and assassinate them. Beyond that, the will of Sithis isn't for you or I to question.
Your task won't be easy, but the Listener has faith that you will succeed."

Although the quest concludes after this, all fifteen pedestals must be filled to complete the Litany. The book provides hints, and can be accessed directly from your inventory under the Miscellaneous Items section.

The Litany involves using the Blade of Woe to kill a specific NPC in each of the fifteen Alliance zones. Aside from the hints provided, the NPC can be confirmed as a target by their single white eye. If you assassinate the correct NPC, they will turn to ash in a red flash of light and their soul will appear back at the Sanctuary. The NPCs respawn immediately, but many of them have a large wander radius. The achievement list can be used to keep track of which zones you've covered.

The following table provides the name and general location of each target. A specific location cannot be given, as the targets have a very wide wander radius. However, they also instantly respawn, meaning you can continue searching the city even if someone steals your kill.

When you return to the Sanctuary after completing all the listed killings, you will be granted the Litany of Blood achievement, allowing you to read Litany of Blood Fulfilled and collect the Cadaverous Assassin Polymorph. You'll also be able to use the Executioner title.