The UESPWiki – Your source for The Elder Scrolls since 1995
< Elder Scrolls Online: Quests: Ebonheart Pact / Stonefalls
Jump to: navigation, search 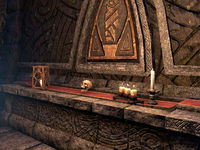 The skull of Nam Indoril

Talk to Holgunn, the commander at Davon's Watch. He needs your help defending Davon's Watch from the Daggerfall Covenant.

He sends you to Grandmaster Tanval Indoril in a manor in the north of the city. You can follow Holgunn or meet him there, if you choose to.

Tanval Indoril's plan is to have you retrieve a relic from beneath the city. It is guarded by his ancestors, making it unethical for anyone from House Indoril retrieving it. The tomb's entrance is across from his house. Once inside, you need to retrieve the skull of Nam Indoril. The skull is to the southeast, inside a chest guarded by Nam Indoril's spirit. The spirit says Tanval will "destroy us all". Retrieve his skull, and return to Tanval.

You tell Tanval what his ancestor said, but he says Nam refused to recognize the Covenant as a threat. He gives you some gold.