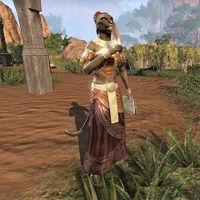 Kideya is a Khajiit who owns the Sweetwater Farmstead in Merryvale. She has two sons, Razum-dar and Rakhzargo. Recently, several of her farmhands went missing and she is looking for more help.

After Rakhzargo directs you to Kideya, she can be found at the farmstead near the storage shed.

"Kideya means no rudeness, but she hasn't time for visitors today. Best to seek company elsewhere, yes?"
Rakhzargo mentioned that some farmhands have gone missing.
"It is true. Workers were happy and plentiful, but now? Moons be praised if half our workforce remains.
Hmm. You look clever. Perhaps you could investigate our missing farmhands?"
Any idea where the farmhands may have gone?
"M'zum, owner of Fragrant Moons Plantation, sought to buy our farm after the last harvest. This one refused.
Kideya suspects he now bribes away her workers in order to make this one desperate enough to sell."
I can look into this for you.
"So kind of you to offer! But take Kideya's eldest son with you, yes? He returned home recently from Moons know where and now he lies about like a slug.
Find the lazy Khajiit in the cave up the hill, just north of the farm."
I'll get your eldest son and start my investigation.
"It's about time Kideya's layabout son helped around here. He may be clever, yes, but when it comes to farm work? You would never believe he was born and raised in Merryvale.
At least Rakhzargo has the decency to help his poor mother."

You can ask her some more questions about M'zum or her eldest son.

Tell me more about this rival farmer, M'zum. / You mentioned someone named M'zum?
"He's the oldest farmer in this valley. Been growing cane since this one was a kitten. And Kideya is now … not as young as she once was.
But make no mistake. M'zum's mind remains as sharp as a serpent's fang."

And you think he's behind the missing farmhands?
"It is possible. No workers means no crops, no profits. Who benefits from this? M'zum, who has wanted to buy Sweetwater for many years."

Have you confronted M'zum about this?
"No. Accusing M'zum with no proof would only give him an opportunity to smear Kideya's name. Bad for business.
That is why she sends you to find evidence. Only then can she confront M'zum."

Sounds like you don't get along with your eldest son.
"Kideya loves her little rascal, of course. But why can't he stay at home and help around the farm? As the eldest, this farm should go to him when this one—no, no.
Apologies. Kideya did not mean to bring up such matters."

After you have finished speaking with Kideya, Rakhzargo will run up to you both.

Rakhzargo: "Mother! Rakhzargo found a new farmhand."
Kideya: "Yes, sweet one, thank you. They're going to look into our troubles, right after they wake up your brother."
Rakhzargo: "Brother is still sleeping? Rakhzargo rose at dawn and has been working hard all day!"
Kideya: "If only your brother were as dutiful as you."

Once and Razum-dar have investigated the Fragrant Moons Plantation for clues, you can discuss it back at the farmstead. Afterwards, Kideya will arrive with Rakhzargo and will assume Razum-dar has been loafing around.

Kideya: "Razum! Your mother sends you to find our missing farmhands and this is where you end up? Our house?"
Razum-dar: "We already searched M'zum's plantation. Raz came back to warn you about—"
Kideya: "Excuses! And this one thought you learned more in your travels than which taverns served the cheapest ale!"
Razum-dar: "You better go, five-claw. This may take some time."

If you talk with her, you can back Razum-dar up.

"Perhaps you have been more helpful than this one's vagrant son. Tell Kideya, have you made any progress with our missing farmhands?"
We have a lead, but first we need to visit Honey-Breeze Homestead.
"And this one supposes that Razum was the one to suggest this plan?
He just wants to make eyes at J'dathal's daughters despite how much his own mother suffers!"
We need to see if Honey-Breeze is having similar issues. It makes sense to check.
"Fine. But you will watch him, yes? Make sure that Razum stays out of trouble. This one had enough hardship cleaning up his mess the first time he left us.
At least the Moons blessed Kideya with one dutiful son."

After helping out at the Honey-Breeze Homestead and killing a monster, you can return to the Sweetwater Farmstead with Raz to check if any moon sugar has been stolen. Kideya will soon arrive and will want to know what you are doing down there.

Razum-dar: "Raz sees nothing out of the ordinary."
<Kideya and Rakhzargo arrive.>
Kideya: "This is where you search for the farmhands? Our cellar? What, are they hiding in the walls?"

If you talk with her, you can explain and she will understand.

"Kideya won't have you two mucking about her stores, you hear? There is enough to do with so many farmhands missing.
What are you even doing down here?"
We believe you may be missing moon-sugar.Missing moon-sugar? Hmm. Well, it is true that Kideya has not inspected her stock these past few days. Too much has been going on.
Do you believe someone is stealing from us?"
It's likely. Both M'zum and J'dathal had moon-sugar stolen.
"Dark Moons, Kideya had no idea.
Then you must continue your search. See if Kideya is also a victim of this heinous crime. And if you find any thieves, show them no mercy."

After finding nothing out of place, Raz will notice the tapestry on a nearby wall.

Razum-dar: "Hmm. That is a rather ornate tapestry for the cellar. Mother, did you hang this?"
Kideya: "What? No, of course not. Who would Mother be trying to impress, the cellar rats?"

"Kideya will admit, that tapestry is rather suspicious. Best if you investigate, yes?"

When you search the tapestry, you'll find a recently dug tunnel behind it. Kideya will ask you and Raz to deal with whoever is responsible.

"How could Kideya have been so blind!
You and Razum will go into the tunnel, yes? Find whoever has been stealing our moon-sugar and make sure they never do so again."

After you and Raz have dealt with Saevus Minutius and the Dirty-Drakes, Kideya will be waiting at the farmstead with both her sons.

"Razum is smug. Well, smugger than usual. And this one can only assume that means that you have solved our problem.
Perhaps Kideya's eldest son is good for something after all."

Once you have received a reward from Razum-dar for your assistance, Kideya will admit to Razum-dar he may have been of "some" help.

Kideya: "Well, it seems you're good for something at least."
Razum-dar: "Good for something? Raz took down an entire skooma operation, for Jode's sake!"
<Captain Brogomir runs up.>
Captain Brogomir: "Razum-dar! Sir! I have an urgent message for you from Queen Ayrenn!"
Rakhzargo: "A message for Raz? Ha! Who would waste paper on him?"
Kideya: "Rakhzargo, shush. Queen Ayrenn? Razum, what is he talking about?"
Razum-dar: "Raz's next assignment. It seems this one's vacation is over, Mother."
Kideya: "Already? But you only just arrived."
Razum-dar: "Well, Raz could stay for one last meal before he departs."
Kideya: "And letters? Will you write us letters?"
Razum-dar: "Doesn't Raz always?"

After that exchange, you can talk with her.

"Kideya did not think Razum would be leaving so soon. But it seems he has important matters to attend to. Who is Kideya to deny the High Elf queen?
This one wonders … what exactly does her son do for the queen?"
Why don't you try talking to him about it?
"Yes. Perhaps it is time to stop assuming the worst of this one's rascal, easy as that may be.
Kideya will cook a nice dinner for her family tonight. Some fresh salmon sprinkled with moon-sugar, perhaps? Just the way Razum likes it."

This Online-related article is a stub. You can help by expanding it.
Retrieved from "https://en.uesp.net/w/index.php?title=Online:Kideya&oldid=1962800"
Categories:
Hidden categories: