The UESPWiki – Your source for The Elder Scrolls since 1995
< Elder Scrolls Online: Places / Alliance War
Jump to: navigation, search 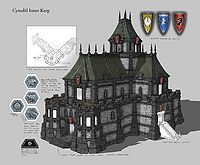 This article is about Alliance-controlled keeps in Cyrodiil. For Keeps found in PvE areas, see Forts.

Keeps are the major conflict zones of the Alliance War. As such they need to withstand constant barrage from siege weapons and lesser tools of destruction. Not all keeps are the same, they differ in layout depending on local terrain and strategic value, but always designed to give the defenders an edge. Keeps are all single-level to improve gameplay, but there are some higher parts to give defenders an advantage. Controlling keeps improves your alliance's position on the Campaign scoreboard, as well as providing a number of passive bonuses. Gaining control of the six keeps surrounding the Imperial City allows your alliance to crown a player as Emperor, who is chosen as the player with the most Alliance Points for that alliance in the current Campaign.

Keeps are maintained and upgraded by the occupation of nearby resources. Without these resources a keep will not be able to be make emergency repairs, or repair after an attack. Almost every part of a keep has destructible parts (but they cannot be leveled). The gates, outer walls, inner walls, and doors, are all susceptible to damage. Without these defenses, defenders would be left exposed, as would the attackers if they claim the keep, as they then become the defenders.

To claim a keep the attackers need to gain entry and occupy two marked zones for a length of time. How you gain entry is up to you, as there are many options (the front gate, a side wall, etc.). Any damage done while taking the keep will need to be repaired, so it is essential to plan the occupancy of the nearby resources before attacking the keep. Once a keep is claimed NPC faction soldiers will appear to help guard the keep. This allows players to leave a keep defended and seek action elsewhere. NPC soldiers are also present at unclaimed keeps to provide some resistance. Also, when claimed, a keep will display faction banners in the form of shields on the exterior of the keeps; these serve a dual purpose of showing where the breakable parts are.

For information on the smaller keeps which lack an outer wall or resources, see Outposts.

Keeps are upgraded based on the control of nearby resources. Lumbermills produce wood, Farms produce food, and Mines produce ore. Production rate upgrades automatically as long as your alliance continues to own the resources. To decrease production at enemy resources, kill the workers there or capture the resource for your alliance. Upgrades cannot be produced for the keep if the resource is owned by a different alliance.

Wood is required to maintain and strengthen a keep's doors. Doors have base HP of 150,000. Provided your alliance controls a keep's lumbermill, the following upgrades will be unlocked over time:

Food increases the health and strength of NPC soldiers. Provided your alliance controls a keep's farm, the following upgrades will be unlocked over time:

Ore is required to repair and upgrade the keep's walls. Walls have base HP of 200,000. Provided your alliance controls a keep's mine, the following upgrades will be unlocked over time: