In Ayleidoon, "Garlas Agea" means "Cavern of Secrets." But the secrets of the Wild Elves were often dark, horrific, and perhaps better forgotten. 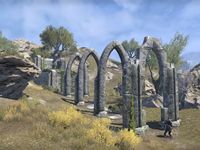 The delve boss, Ironfang, has a chance to drop the following chapters of the Assassins League style: Shoulders, Legs, Shields, Shoulders, and Staves.

This Elder Scrolls Online-related article is a stub. You can help by expanding it.
Retrieved from "https://en.uesp.net/w/index.php?title=Online:Garlas_Agea&oldid=2208476"
Categories:
Hidden categories: