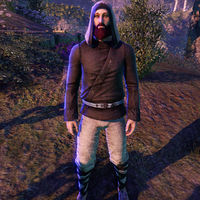 Curator Nicholas is a Breton found in the Bad Man's Hallows. He heads the Harvest Festival being held within the Hallows and welcomes any newcomers to participate in the rituals.

However, Nicholas is not as benign as appears. He was previously part of a circle of mages whose experiments into conjuration led to something being summoned which killed almost everyone else.

When you approach him, he says:

Curator Nicholas: "What a beautiful day, we couldn't have asked for better weather for the harvest festival."

When you speak with him, you can ask him about the aforementioned festival.

"Welcome to the Harvest Festival! Is this your first visit to Bad Man's Hallows?"
Bad Man's Hallows?
"The Bad Man is one of the old gods, the source of all strife and the god of crop failure. According to local tradition, appeasing him will ensure a good harvest. Superstitious nonsense, but an excellent excuse for a festival!"
How do you appease the Bad Man?
"First we gather baskets of fresh apples and bags of hearty grain, then we burn them on the sacrificial altar in his honor.
After that, comes the feast! Help us gather the offering and I'll see that you get a seat of honor!"
Sounds like a fair trade.
"May our humble offerings bring Sheor's mercy upon us. Then, we feast!"

Do you really believe this offering will bring a good harvest?

"Like I said before, it's probably just superstition, but as my great-uncle Nichodemus used to say, "It couldn't hurt!"

Do you always let strangers participate in the festival?

"We're a friendly folk here in The Hallows. We share our traditions with all who would respect them. And it's always nice to see a fresh face at the table!"

After gathering the items for the sacrificial rite, he will be pleased.

"May our humble offerings bring Sheor's mercy upon us. Then, we feast!
Well played! Now place the offerings on the altar behind me."

Once you have placed the sacrificial goods on the altar, the Curator will begin the rites.

Curator Nicholas: "Brothers and sisters! The newcomer has made an offering to the Bad Man! Join with me in celebration!"
Curator Nicholas: "Bad Man, stern hand of the harvest, master of blight and plenty, accept this gift! Feed, and grow stronger."

When you speak with him afterwards, he will ask you to perform the final part of the ritual.

"Well done. As a final step, you must scatter dirt on the fire."
Why dirt?
"According to the legend, "Just as our crops feed on the soil of the Hallows, so too will the Bad Man feed."
Also, it's a tradition. Humor us."

After the completing the ritual, the true face of the situation will reveal itself. Eventually you will make your way back to the Festival tree to kill the Bad Man only to encounter Curator Nicholas again. However he will be severely burnt as his master was not pleased.

"So much death …."
What happened here?
"You live? Of course. His anger came after you were consumed in flame."
Anger?
"Soon after you were sacrificed, the Bad Man became enraged. He turned on us. Rained death upon the grove. It was consumed in fire.
And now you return. What did you do?"
I burned the roots below using these shalk glands.
"Of course! That may be the only way to defeat him!
Quickly, now. Burn the shalk glands at his altar. He'll be forced to consume them, and they'll burn him from the inside out. You must hurry. It's our only chance!"

When you finish speaking with him, he will die. [verification needed — see talk page]