This costume represents the armor worn by the assassins who accompanied the Kamali Akaviri invasion.

Established to create an impregnable border between Skyrim and the Reach, Karthald Hold maintains a war footing year-round, and its jarl stands at the ready to leap to the defense of Skyrim in this regal mix of satin and steel. 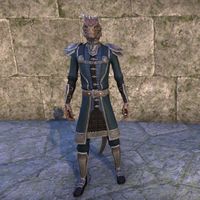 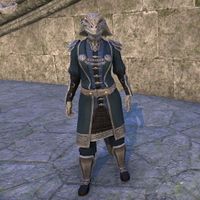 (The belt and the blue on the undercoat are not dyeable)

Even if you're not a kinlord, every High Elf is a noble at heart, and wants something in his wardrobe suitable for attendance at Alinor's Royal Palace. This majestic Elven ensemble is just the thing! 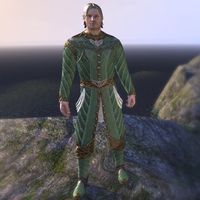 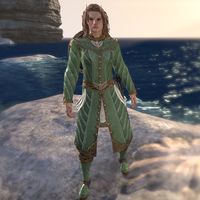 . This outfit was removed from the crown store without prior notice in September 2018 for unknown reasons, and is now available as an Epic-level reward in Baandari Pedlar Crown Crates.

(White cloth on waist and under suit jacket are not dyeable)

Plate and chainmail armor with red accents, topped by an armet helm with open visor, as worn by the Breton Knights of the Flame. 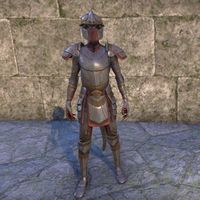 Knight of the Flame (male) 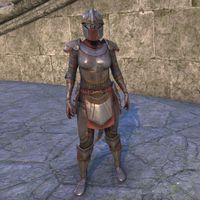 Knight of the Flame (female)

. This was retired from the crown store on December 11, 2017. [1]. It is now available in the Adept Starter Pack alongside the Mages Guild Research Robes, Crafty Lerisa's Thief Outfit and White Mane Horse for 010001000