The UESPWiki – Your source for The Elder Scrolls since 1995
< Online: Quests: Deshaan / Side Quests
Jump to: navigation, search

An extremely angry Argonian named Azeenus has asked me to seek vengeance against the Khajiiti pirates in his name. 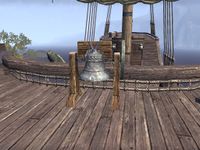 You'll find Azeenus hiding inside the hollow of a tree near a large ship. Talking to him reveals that he harbors a lot of anger toward the Renrijra pirates who attacked Silent Mire. He wants vengeance, but is not courageous enough to attack. He asks you to burn their boats and kill the Renrijra pirate captain Sa'dir.

"Flea-bitten, mangy Khajiit!
Those opportunistic, vile, simpering creatures are unworthy of the lives they possess!"
What are you doing out here?
"I'm watching the pirates and letting my anger rise like the ocean at high tide!
The Khajiit must pay for their attack on our village, but my courage hasn't yet reached the level of my anger. I demand vengeance!"
What would you have me do?
"Burn their boats, kill the bastards, but most of all, get their wretched captain! I want Captain Sa'dir dead! He sleeps in his ship's rigging while we suffer. Ring the ship's warning bell to wake the cur.
Here. Use this torch to burn their boats."

There are eight rowboats in total: four just north of Azeenus (where you free a set of captives for The Saving of Silent Mire), and the other four at the southern end of the village near Churasu's alchemy hut from Strange Guard Beasts. Simply activate the boats to burn them.

To get to the captain, you'll need to make your way onto the ship The Crafty Monkey. Go inside and follow the quest marker to the top deck. Once there, activate the bell to ring it. Sa'dir will appear in the center of the deck near the mast. You can jump down and kill him.

Azeenus will have moved to the north end of Silent Mire, near where Leel-Vata hides after you free the captives in The Saving of Silent Mire. Talk to him to end the quest. He rewards you with his axe and some gold.

"You look a little bloodstained. Smells like Khajiiti blood. Smells like ... victory!"
The pirate captain is dead.
"Then perhaps you understand how delicious revenge can be. Every insult and every slight must be returned in kind.
You honor us, friend. Take this and kill any who may wrong you!"

This Online-related article is a stub. You can help by expanding it.
Retrieved from "https://en.uesp.net/w/index.php?title=Online:Cold-Blooded_Vengeance&oldid=2119504"
Categories:
Hidden categories: