The Prophet and I are seeking a way to rescue Sai Sahan, the Redguard who hid away the Amulet of Kings.

After you reach a large city (example: Daggerfall), the Prophet beckons you back to the Harborage. When you get there, you need to speak to the Prophet. He needs your help finding Sai Sahan. Lyris Titanborn alerted the Prophet to fear in the city; one of Mannimarco's agents is among them. The Prophet asks you to find the agent and to stay alert as Mannimarco's followers, Worm Cultists, are powerful necromancers. You can also go around the left side of the Harborage near the Sky Shard and you will be beckoned.

If you belong to the Aldmeri Dominion, the Prophet will tell you to speak to the fisherman, Mehdir, and the jongleur, Diranor. Mehdir is fishing on the docks. He mentions he saw a strange Imperial man lurking by the lighthouse. You can bribe him 38 gold to tell you where this strange man is, or you can ask him if he knows anything else. If you don't bribe him, he will not tell you anything else useful as he is afraid his curiosity will get him into trouble. You will need to talk to Diranor in the center of the city to get the rest of the information. He talked to an Imperial man who asked him where the local burial grounds are. You can Intimidate Diranor, if you have the perk, about insulting Queen Ayrenn, or you can ask him where the man might be. He thinks the man was heading toward the lighthouse. Go to the Vulkhel Guard Lighthouse, and use the trapdoor on the left side behind the partition to enter the Abandoned Cellar.

If you are in the Ebonheart Pact, you need to talk to Feduria Llaren and Okeeh. Feduria is in the market in Davon's Watch. She saw an Imperial man heading to the east end of town. If you have the Persuasion perk, you can get her to tell you more, or you can ask if she knows anything else. She saw him heading to the stables. Okeeh is south of the Fighters Guild. He saw an out-of-towner near the abandoned stable. You can Intimidate him, if you have the Intimidation Perk. You need to search the Abandoned Stable stall northeast of the stable icon on the map. Open the trapdoor to the Abandoned Cellar in the floor of the stable.

If you are in the Daggerfall Covenant, you will search the city of Daggerfall. The Prophet tells you to speak with Maxelle, an old maid, and Husniya, a mercenary. Maxelle is south of the stable, Happy, Healthy Horses, in the center of the city. She claims to know everyone in Daggerfall and notes that you are an out-of-towner. She noticed an Imperial "vagrant" nosing around the castle's trash. You can Persuade her, complimenting her beauty and observational skills, with the Persuasion Perk, or you can simply ask her if she can tell you anything else. If you are able to persuade her, she remembers she saw him on the south side of town with a thin, sickly, pale man. Husniya can be found, mug in hand, at the Rosy Lion, not far from Maxelle. She saw a "dodgy looking Imperial" near South Gate Alley that very morning. You can Intimidate her, if you have the perk, or ask her if she can tell you anything else. If you intimidate her, she says she saw the man slip into a house near the south gate.

The south gate building, Vachel's House, is close to the southern stables, Bazgara's Horses, and almost directly west of the Harborage. Enter the house, then descend into the Abandoned Cellar through the trapdoor across from you. 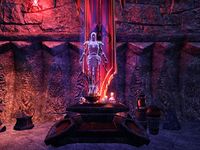 The projection of Abnur Tharn

The loading screen for the Abandoned Cellar shows this is the Worm's Retreat. While searching the underground chamber, you come across Aldimion. Defeat him, then use the Orb of Discourse. Speak to the projection of Abnur Tharn. He doesn't recognize you, so you can either Persuade him, if you have the perk, or ask who he is. Persuading him allows you to skip a fight with Severinus Falco, a Worm Cultist, and Tharn comments on your character's "disguise." He reveals that he does know where Sai Sahan is, but he doesn't tell you his location. If you initiate the fight with Severinus, you will likely have to kill him to escape. However, he will disappear if he kills you, so it doesn't matter whether you win or lose.

You return to the Harborage with this information. You give the orb to the Prophet, as it might help him.

Lyris calls you over after hearing you mention Tharn's name. She hates him, and you can ask her to tell you the full story or choose to skip it. She thinks he is a coward, but you might be able to persuade him to leave the Worm Cult if you had something he wanted. She gives you time to take the information in and gives you a reward.