The UESPWiki – Your source for The Elder Scrolls since 1995
< Elder Scrolls Online: Quests: Thieves Guild(Redirected from Online:Broken Wheel)
Jump to: navigation, search
Silver-Claw found out the Iron Wheel is planning to ship Zeira to Taneth. As acting guildmaster, I've called on the Thieves Guild to do something about it. 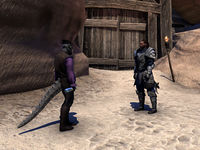 "Halt! This citadel is under the jurisdiction of the Iron Wheel!" - "Never heard of that tavern. What do they sell?" 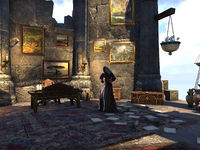 Magnifica Falorah is waiting to speak with you at Chief Inspector Rhanbiq's office. 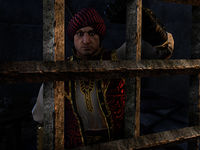 Zeira was not in her prison block... but somebody else was.

When you enter the Thieves Den, you'll find Silver-Claw pacing around nervously. He tells you the Iron Wheel is leaving, and that they plan to take Zeira to Taneth to stand trial for raiding Al-Danobia Tomb. She's being held somewhere in No Shira Citadel.

Talk to your companions. Walks-Softly will remind you that the Iron Wheel is trained to recognize members by mannerism instead of faces, as they often switch out people to avoid them from forming attachments with the locals. He also tells you he knows their behavior well enough to impersonate them. Walks-Softly tells you to bring the journal from Al-Danobia Tomb to No Shira Citadel, but won't tell you why just yet. Next, talk to Quen. Quen tells you she'll scout the citadel for the best way in, and marks a rendezvous point on your map. You'll meet her there after she's done scouting. Lastly, talk to Velsa, who is annoyed that she is once again being dragged into guild business, as she's retired. Regardless, she promises to cause a distraction at the front gate to make your entrance easier.

Take the journal and meet Quen at the location marked on your map.Where exactly? any nearby locales? Which cardinal direction away from said locale? She informs you that Velsa's distraction is working, and proceeds to tell you about a small gap in the wall that you can enter. There's only one sentry at this location, and Walks-Softly is already waiting for you there.

Go talk to Walks-Softly. The sentry is thirsty, and Walks-Softly plans to take the man's uniform while you enter No Shira Citadel. Once inside, Velsa will appear, telling you that she will continue to follow you in the shadows. Walks-Softly suggests that you drop the journal in Chief Inspector Rhanbiq's office to ensure Nicolas is sentenced during his trial at Taneth. At the same time, you may be able to find out where Zeira is being held. Sneak or fight your way into Chief Inspector Rhanbiq's office,Any specific directions? where you'll find Magnifica Falorah. Talk to her.

"I have no quarrel with you. My dowry is safely returned to al-Danobia Tomb, as are the remains of my ancestor. Those responsible are in custody.
Yet I am not entirely satisfied with the outcome."
Nor am I.
"My former fiance Cosh … that is, Nicolas … has been very cooperative with the Iron. He claims he was duped, that stealing my dowry was Zeira's plan all along.
Zeira has said nothing."
What do you think?
"Zeira's price to surrender was the safety of those she brought along to the wedding. You, and your strange little friend. Almost … honorable, in her own way.
Nicolas lies—I know that now. But Chief Inspector Rhanbiq has no evidence to the contrary."
I have evidence. I'll trade it for Zeira's freedom.
"The town criers in Taneth already proclaim her trial. Politics as they are, I cannot simply release her.
But I can tell you where she is. And I can offer a lucrative proposal to your entire organization—to her directly, once you free her."
Deal. Here, read this journal. It will prove Nicolas' guilt.
"Good. Zeira is held in the prisons beneath us, but you must hurry. Chief Inspector Rhanbiq plans to move her—to where, I do not know.
I'll escort you to the prison door. If you stay by my side, the Iron Wheel shall cause you no harm. Are you ready?"
I'm ready.

She tells you Zeira is in the prison underneath, and will lead you there to prevent the Iron Wheel from stopping you. Follow her and Walks-Softly will find you inside. From there on, navigate to the cell blocks. Soon after entering, you'll find Nicolas's cell. He says he knows where Chief Inspector Rhanbiq took Zeira and is willing to tell you in exchange for a single lockpick. Walks-Softly, Velsa, and Quen come walking up at this point. You can consult with them before making your decision if you'd like.

Walks-Softly will tell you Nicolas used to be bad at lockpicking, so all you're giving him is a slight sliver of hope in exchange for finding Zeira in time. Velsa will say she knows Nicolas indeed knows the location and that you should give him the lockpick because it get's you what you need. Quen will be harshly against giving the lockpick, and says that transfer orders are stored upstairs so you can get the info there.

If you give Nicolas a lockpick, he'll tell you Zeira's location right away and you can continue.

If you refuse to give Nicolas a lockpick, Nicolas will tell you only that there are transfer papers in the Warden's Office. Go to the wardens office and grab the transfer papers.

After finding Zeira's location, leave through the door to No Shira Harbor. Grab the key from the table, and go onto the ship. Walks-Softly will be waiting at the entrance. Go inside and you hear Chief Inspector Rhanbiq talking to Zeira. Talk to him. He tells you you have the upper hand due to his lack of weapons, which puts you in a position to talk. He'll explain that without proof, Nicolas his story will be believed. Tell him about the journal you have to Falorah. At this point, his reaction will change depending on your choice of returning the Giovessen Skull during Partners in Crime or not, and Velsa will sneak up behind him, who will knock him out while you've got his attention. After this, unlock Zeira's cell door and talk to her. Zeira will be happy to be saved, and tell you she can't wait to get to the den after "taking care of some business". Outside you'll find Falorah talking with Walks-Softly. Zeira will tell Falorah she will discuss things with her later. Leave using the rowboat a bit north. Head back to the Thieves Den and talk to Zeira. She tells you the Iron Wheel is no longer a danger, that Nicolas will be put onto a trial for show and convicted, after which she'll tell you she's going to see what Falorah for opportunity has to offer and the quest is completed.