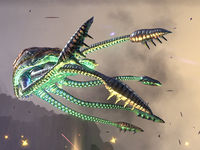 Bleiger is a bull netch living in a cove with a fishing hole and water hyacinth plant, on the north-west coast of Stonefalls.

He makes his home among scattered skeletons--human and troll--and a pile of skulls heaped atop a black altar. The first clue that you're approaching his abode is the trail of poisoned mudcrabs dead on the sand, leading you straight to him. There are also an essence rune and treasure chest just down the beach.

Shaali Kulun will both provide Bleiger's related quest and tell you a little about him. Namely, that he is a "vicious and territorial bull netch." Bleiger is hostile on sight and upon death drops Bleiger's Tentacle, which is necessary to complete his related quest.

This Online-related article is a stub. You can help by expanding it.
Retrieved from "https://en.uesp.net/w/index.php?title=Online:Bleiger&oldid=2013627"
Categories:
Hidden categories: