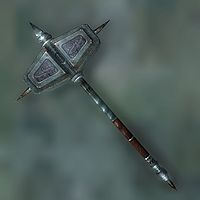 The Daedric artifact Volendrung is a gigantic and powerful two-handed Dwemer warhammer that can be obtained as the reward for Malacath's Daedric Quest. It is enchanted with Drain Health and Paralyze.

Volendrung has appeared in many Elder Scrolls games and also has been mentioned in numerous in-game books (for information on previous versions, see their pages).

According to the first edition of the pocket guide to the Empire, Volendrung should be of profound historical importance to the Dwemer. Ironically, the treatise on ancient artifacts written by the last living dwarf makes no mention of Volendrung, and for unknown reasons, it became associated with the Daedric Prince Malacath, one of the Dwemer's most bitter foes.