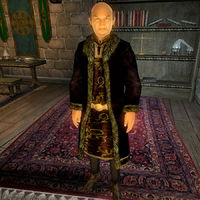 Vigge the Cautious in the Skingrad Guild Hall

Vigge the Cautious, a Nord mage, is a Conjurer of the Mages Guild who sells spells and offers recharging services at the Skingrad Guildhall. Despite being the highest ranking member in town, he is not the head of the guildhall.

He seems to have little to do in his life. He eats lunch from midday to 2pm and dinner from 6pm to 8pm, and spends most of the rest of the day wandering around the Guild building. He does so every morning when he wakes up, from 8am to midday; after lunch, from 2pm until 5pm and after dinner, from 8pm until midnight, when he goes to sleep in his room in the Living Quarters, waking at 8am once more. The only time he leaves the guild is at 5pm, when regardless of weather, he takes a trip towards the Chapel of Julianos. He never quite reaches the chapel, however, giving up and returning to the guild at 6pm.

He wears upper-class garb, consisting of a black & burgundy outfit and a pair of green velvet shoes. He also carries a small amount of gold and a spare green silk garment. He doesn't carry any weapons, relying instead on a set of medium-high level Destruction spells. These are also the same spells that you can buy from him for a cheap price, since his Mercantile is a mere 6. He will always offer his services when not sleeping, eating, or taking his abortive trip to the chapel.

Vigge seems to be somewhat diffident. When first encountered he will say, "You want me? You sure? I'm Vigge. I'm Mages Guild, but I don't train or anything." This extends to his attitude towards his posting in Skingrad. When asked about town, he says "Well, it's a bit rugged. Nothing like the Arcane University. Have to go to the Imperial City to buy anything. But it's good enough, I suppose." If you are not in the Guild, Vigge will tell you about the many benefits of joining: "The best spells are closely guarded by the guild, but are available to high-ranking members. You should consider joining." Even though he himself has a good repertoire of spells, he will inform you that certain mages at the Arcane University have mastered even more: "Between the two of them, Borissean and Gaspar have mastered nearly every type of spell there is. You'd be wise to go see them if you can."

During the recommendation quest, Vigge will not be overly helpful but will instead point you towards the right people. When asked about the missing Erthor he will inform you about Bleak Flats Cave: "He hasn't shown up here in a while. I assumed he was still out at Bleak Flats Cave, where he usually stays." When asked about the cave, Vigge will instead point you to Druja: "I don't remember where it is, honestly. I know it's west of Skingrad... Druja could probably tell you. She has a better memory than I do."

The townsfolk have a rather higher opinion of his ability, though, and may be overheard saying "Must be nice being in the Mages Guild. If they need something recharged, they just talk to Vigge the Cautious, and poof! All done." or "Vigge the Cautious is responsible for enchanted item recharge at the Mages Guild. Good thing he's cautious. I'd hate to have something go wrong." Druja will also recommend Vigge: "Adrienne may read too much, but you should see the Summon spell she taught Vigge. He might teach you, if you're skilled enough."