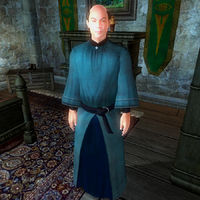 Sulinus Vassinus, an Imperial sorcerer, is an Evoker of the Mages Guild who offers basic Conjuration training and sells spells at the Skingrad Guild Hall.

He lives a relatively simple existence, eating lunch from midday to 2pm and dinner from 6pm to 8pm, and sleeping in his room in the Living Quarters from 2am to 9am. He spends the rest of the day wandering around the Guild building.

He wears the standard mage's robe and a pair of green velvet shoes, and carries a small amount of gold. In combat he relies on a silver shortsword and on a large set of basic Apprentice-level spells from all of the magical schools. These are the same spells that you can buy cheaply from him, since his Mercantile is a mere 16. He will always be available for training when not eating or sleeping.

The first time you meet him, he will politely introduce himself: "I'm Sulinus Vassinus of the Mages Guild, and I'm so pleased to make your acquaintance." If you are not in the Guild, he will strongly recommend that you join: "The guild has quite a few connections, and it always helps to know the right people, wouldn't you say? You should think about joining." After you have joined, he will give you some information on the services provided in the Skingrad Mages Guild: "Have you met Adrienne Berene, our Skingrad Mages Guild head? Not the most pleasant person, I'll admit. Don't mind her. Interested in training? I do the Conjuration courses, and Druja does the Mysticism." He will also drop in a word or two about higher level training: "The guild can provide you with some training, but the best trainers are usually very hard to find."

People on the streets of Skingrad will often talk about the local conjurer. When asked for rumors or during private conversations, they will say: "If you're looking to learn a bit about Conjuration, Sulinus Vassinus is a good person to talk to." and "I saw Sulinus Vassinus at the Mages Guild conjure up some sort of creature, right there in the street. Guards took care of it." Their replies, however, often reflects a disrespect for conjuration: "All that conjuring gives me the creeps. There are plenty of scary things in this world without bringing more around." and "I don't want to learn how to conjure things. I want to learn how to get rid of things."

"So you're supposed to go out and rescue Erthor, eh? I'd love to help out. I just don't quite feel comfortable doing that, though." (listen)
"I hear Adrienne is sending you out to get Erthor. Is that right? Hmm. It's a pity you don't have the right sort of friends. Friends that would be willing to help out with a task like that." (listen)
"I tell you what. I have some outstanding debts I need to pay off. You help me out with that, and I'll help you out with getting Erthor back. Heck, I'll even go do the job for you for 300 gold. When Erthor gets back, you can take the credit. What do you say?" (listen)
"Okay then. I'll just take this gold from you, and I'll head out there right now. No one should even know I'm gone. In three days or so, Erthor should be back here, safe and sound. I'll fill him in - you just tell Adrienne that you did the work, and you'll be set. Pleasure doing business with you, friend!" (listen)
"Oh. Are you sure? Well, think about it, and if you change your mind, let me know. I really do need some money, you see." (listen)
"You'll be happy to know that Erthor is back in town. He knows to tell Adrienne that you're the one who rescued him. You should be able to tell her you've completed her little task. And let's just keep this little deal between us, shall we?" (listen)
"He's back to his normal routine now, all safe and sound. Enjoy taking credit for the work." (listen)