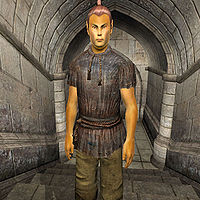 Errandil is an Altmer pilgrim and the only living saint of Arkay. Naturally, he can be found at the Chapel of Arkay, located in Cheydinhal, where he works as a cleric.

Errandil takes his role as Living Saint seriously, and he puts a lot of effort in his daily routine to keep up his good reputation among the people of Cheydinhal. He wakes up early at 6am everyday, starting his day by two hours of strolling around the Chapel Hall. At 8am he will surface in the Chapel Main Hall, where he will direct to the altar of Dibella to receive his first blessing of the day, followed by a brief moment of praying while seated on one of the pews. At 10am he will leave the Chapel and will head to the graveyard to pay his respects to the deceased during two hours more, when he will head back to the Chapel Hall to rest for a brief moment. At 2pm he will leave the Chapel again, this time to take a relaxing stroll around the west bridge of the city while chatting with the other townsfolk. After two hours of roaming around, he will head back to the Chapel to receive his second blessing of Dibella, followed by four hours silent praying. Once the clock hits 8pm, he will return to the Chapel Hall to have his only meal of the day during two hours with his fellow worshippers. After he has been satisfied he will take one last stroll around the Chapel Hall, before he finally goes to bed at 12am.

He wears a lower-class outfit consisting of a sack cloth shirt, sack cloth pants, and a pair of sack cloth sandals. He carries the key to the chapel and a key to the undercroft, as well as a few pieces of gold. By being the Living Saint of Arkay he prefers not to fight, but won't hesitate to use his bare fists to defend himself during combat.

Errandil is a major opponent of the practices of necromancy, and he makes it very clear from the first moment you speak with him:"I'm Errandil, Living Saint of Arkay, and the Chapel's chief crusader against the wicked practice of necromancy." When you ask him about Cheydinhal, he will express his approval towards Hannibal Traven's new policies in the Mages Guild: "It's a scandal that the Mages Guild has tolerated practice of the Black Arts among its members for so long. The current Arch-Mage, Hannibal Traven, is true and bold to prohibit necromancy, reversing the Guild's shameful past policies of official tolerance."