The UESPWiki – Your source for The Elder Scrolls since 1995
< Oblivion: Places: Buildings
Jump to: navigation, search 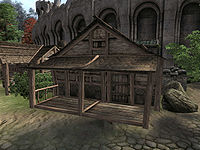 The Abandoned Shack is a shack situated in the Waterfront District of the Imperial City. The house itself is situated beside Methredhel's House and near Dareloth's House. 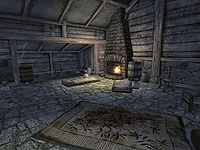 Inside the Abandoned Shack

It is the residence of two former Raven Rock employees, Dranas Llethro and Hillod the Outlaw, and consists of only one zone, Abandoned Shack.

Upon entering the shack, two bedrolls lie on the floor in front of the fireplace next to two clutter sacks, and a food barrel sits next to it. Two apples and a loaf of bread sit on a plate on the floor in the western corner next to a food sack and a clutter sack. In the alcove in the northwest of the building two sacks and a barrel contain clutter, and another sack holds food. The barrels respawn, but the sacks do not, and so are safe for long-term storage.