The UESPWiki – Your source for The Elder Scrolls since 1995
< Morrowind: Quests: House Telvanni / Molag Amur
Jump to: navigation, search

Once you reach the rank of Mouth you can start the construction of your stronghold by talking with Llunela Hleran in the Telvanni Council House in Sadrith Mora. She will tell you that you need a construction contract from Duke Vedam Dren in the Grand Council Chamber in Ebonheart and that you must collect two strong souls.

Getting the Contract and the Souls[edit] 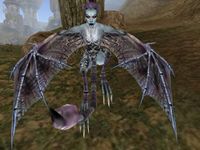 Procure a strong soul for Llunela

All that Vedam requires is for you to give an oath to aid the people of Vvardenfell for you to receive the contract. If you have already received Moon-and-Star from Azura, he will give it to you without hesitation, for all the noble acts you have done for Morrowind. The best way to get the souls is to summon two of the suggested daedra (Winged Twilight, Storm Atronach or Golden Saint); Galar Rothan in the Telvanni Council House entry has a greater soul gem filled with a storm atronach on his shelf, that you can either buy or steal (he also has one with an ogrim, but that soul will not work for this quest). There is also a filled grand soul gem with a Winged Twilight on the desk of Galbedir in the Balmora mage's guild. Urtiso Faryon in her Sorcerer's store and Nelso Salenim in the Telvanni Council House both sell a Summon Storm Atronach spell if you need one. For those with lower conjuration, a respawning Storm Atronach is located at the bottom of Mount Kand cavern. Once the two souls gems are filled, return to Hleran to begin the first phase of construction on your stronghold. On the fifth midnight after turning in the soul gems and the contract, you'll receive a journal entry prompting you to speak with Hleran again. (For example, if you turned in the soul gems and contract even as late as 11 pm on day 10, you'll receive the journal entry at 12 am on day 15.)

Warning: She will gladly accept Azura's Star as one of the soul gems, and she will not give it back. Make sure you store it somewhere before you return to her with the filled soul gems.

Hleran will now give you the stronghold's location (Tel Uvirith in the Uvirith's Grave area), northwest of the Erabenimsun Camp, far west-southwest of Sadrith Mora. Speak with the site foreman there, the Orc Gashnakh gra-Mughol, and return to report to Hleran.

Construction will be finished on the fifth midnight after you report to Hleran, and you will receive a journal entry to that effect. The first phase does not result in any interior cells. The mushroom is slightly bigger than during the construction phase and the crystals will have disappeared.

Once the first phase of construction on your stronghold is complete, you can speak with Hleran again to begin your first upgrade. Hleran will ask you for 5,000 gold and some Dwemer plans from the ruins of Mzanchend (northwest of your stronghold). Bring the plan and the gold back to Hleran to start the upgrade construction.

You will receive a journal entry on the fifth midnight once construction is complete. The second phase results in two homes and the lower tower.

Once you reach the rank of Master or Magister, speak to Hleran again to begin your second and last upgrade to your tower. She will tell you that guards are needed for your stronghold and that you'll need to find the book Secrets of Dwemer Animunculi, found only in the vampire lair Galom Daeus, to create the guards.

The lair is west-southwest of your tower and it is a dangerous place, as it is home to the Berne Clan of vampires. Retrieve the book and return to Hleran, who will order the final phase of construction to begin (note that when you collect the book you also gain the Dwemer Animunculi spell to summon a Centurion Sphere, the only known way to get it).

You'll receive a journal entry on the fifth midnight once the construction is complete.