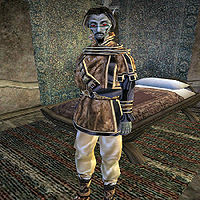 Serjo Avon Oran is a House Hlaalu noble and the governor of Suran, where he lives in his own manor. He runs Inanius Egg Mine. Avon offers medium training in Short Blade, Light Armor, and Security, as well as a supply of high-grade thieves' tools for sale, regardless of your membership in the House.

He wears an extravagant shirt along with exquisite pants with matching belt, shoes, amulet, and ring. In combat, he relies on a silver shardblade. Aside from his natural resistance to fire and the sanctuary provided by his ancestors, he knows no spells.