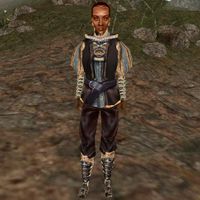 Pemenie is a Redguard rogue trader who can be found on the road north of Caldera on the way to Ald'ruhn. She is wearing the Boots of Blinding Speed along with an expensive shirt, pants, and belt. She carries a Steel Viperaxe and up to 50 gold. Like all Redguards, she has a natural resistance to poison and disease, and can boost her health, strength, agility and endurance for a short period of time; otherwise, she knows no spells.

If you talk to her she will ask you to escort her to Gnaar Mok in exchange for the Boots. If you ask around in Gnaar Mok or Caldera you will discover she is a wanted felon.

If you mention the bounty over her head, Pemenie's disposition toward you will drop by 10 points each time you mention it, until she becomes completely annoyed and attacks you.

"That's me. Just an honest trader."