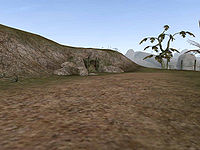 Palansour is a cave in West Gash containing daedra and a sad sorcerer. 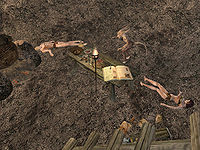 The carnage inside the cave

The cave is a short way southeast of Ald Velothi, and south of the nearby Daedric shrine of Ashalmawia.

Outside its partially submerged northwest entrance, there is a dead, viciously clawed smuggler in a boat. There are several sacks and things around him containing treasure.

A gang of smugglers' experiments here went wrong. Evidently they were dabbling with summoned scamps and an ogrim. However, the summoned creatures got out of control. The book Hanin's Wake, located on a table in the center, hints at what morbid things happened here.

All but one of the smugglers are dead, and the survivor is kept in a small area (look up east in the central room), that can only be reached by levitation. Imprisoned behind a locked gate, Inwold was forced to wear women's clothes for the amusement of his captors. 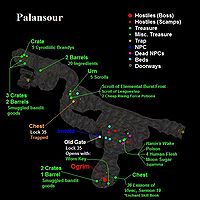