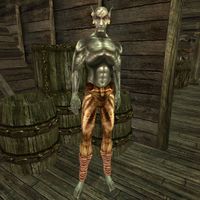 Jiub is the first person you see in the game, a Dark Elf thief, and a fellow prisoner on the ship where you wake up. He is only wearing common pants. Aside from his natural resistance to fire and the sanctuary provided by his ancestors, he knows no spells.

As the opening cinematic comes to a close Jiub wakes you up from your sleep by saying: "Wake up, we're here. Why are you shaking? Are you ok? Wake up." Once you awaken from your sleep he will greet you with: "Stand up... there you go. You were dreaming. What's your name?" At this point you tell him your name and he speaks once again by saying: "Well, not even last night's storm could wake you. I heard them say we've reached Morrowind, I'm sure they'll let us go." As an Imperial soldier walks down towards you, he will simply remark: "Quiet, here comes the guard." If you linger around him as the Guard starts to escort you out of the ship, Jiub will say: "You better do what they say." This is the only time you will see him.

Once you enter the Census and Excise Offices, Jiub will disappear from the game along with the ship.