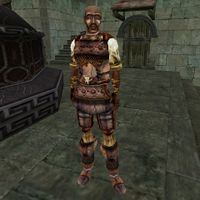 Ian is a Redguard archer and Protector of the Fighters Guild working as a mercenary for the East Empire Company, protecting their property in Ebonheart. He can be found wandering around the plaza near the dragon statue.

He wears a Nordic fur cuirass with matching boots and greaves, cloth bracers, a common shirt, common belt, and some common pants.

He's armed with a steel katana, a long bow, and sixty iron arrows. Like all Redguards, he has a natural resistance to poison and disease, and can boost his health, strength, agility and endurance for a short period of time. Aside from that, he also knows the following spells: Hearth Heal, Righteousness, Free Action, Balyna's Antidote, Cure Poison, Seryn's Gift, Resist Fire, Resist Cold, Resist Common Disease, Resist Frost, Resist Magicka, Restore Agility, Rest of St. Merris, Great Heal Companion, and Restore Strength.

Archers around Vvardenfell will tell you to speak with him if you are interested in learning about the trade of an archer. He has unique dialogue on the following archer-related topics: