The UESPWiki – Your source for The Elder Scrolls since 1995
< Morrowind: People / Merchants / Enchanters / Trainers
Jump to: navigation, search 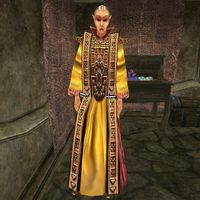 Galbedir is a Wood Elf enchantress and Journeyman in the Mages Guild. She can be found in the upper level of the guildhall in Balmora. She also has a grudge against Ajira. Galbedir is one of the few vendors who both sells filled soul gems and enchanted items, and also provides enchanting services. She is an excellent source for both new and experienced characters. She also offers minor training in Alchemy, Destruction, and Unarmored.