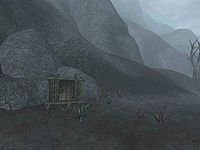 Elith-Pal Mine is an ebony mine just to the west of the Zainab Ashlander camp.

The mine is run mostly by Imperials, with Dunmer crew and a Bosmer supervisor whose main duty is to provide a reliable supply of flin to keep morale high among the workers.

Stealing the raw ebony here might be tempting, but be wary of the guards.

Map of Elith-Pal Mine
Retrieved from "https://en.uesp.net/w/index.php?title=Morrowind:Elith-Pal_Mine&oldid=1840306"
Categories:
Hidden categories: